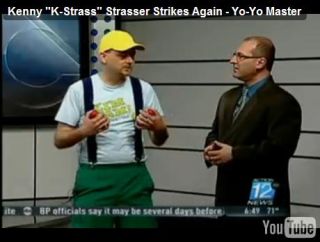 MULTIPLE CITIES: At least five Midwestern TV stations were taken in during the last few weeks by an alleged yo-yo champion who had no yo-yo skills whatsoever. Video of Kenny Strasser’s appearance on KODE-TV in Joplin, Mo., is quickly becoming viral on YouTube. The enthusiastic reporter builds Strasser up as an expert with the stringed spool who tours schools delivering environmental messages. Strasser then launches into possibly the worst yo-yo demonstration in the object’s history.

He starts with a rap about himself, the K-Strass, followed by a bit of fervent scat singing and then a declaration that he normally wears a headset “because I act like I’m a... Blue Angel.” He then drops one yo-yo attempting to swing several over his head like a helicopter blade as the strings entangle. He then ends the performance, telling the reporter that he doesn’t have the proper “muscle memory” for this yo-yo stuff.

Strasser--though it’s now uncertain if that’s his real name--made it onto KODE in Joplin and KQTV-TV in St. Joseph, Mo.; WFRV-TV in Green Bay, and WISC-TV and WMTV-TV in Madison, Wis., according to Milwaukee’s Journal Sentinel. The huckster reportedly forget yo-yo string for his April 11 WFRV interview, which consequently turned into an interview. In another, he started talking about his personal life.

Strasser has since apparently disappeared from the local news circuit.
-- Deborah D. McAdams