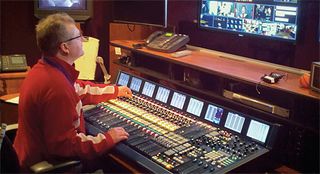 Fisher's previous audio mixing console often crashed at inopportune times, prompting the company to keep a second mixing console in the control room as a backup. As part of Fisher's shift to full HD, the aging console was retired and replaced by a new Wheatstone Dimension One TV audio console—which brought with it additional advanced audio capabilities and flexibility.

"Seattle is our flagship market and the company has deep roots into the community that we take very seriously," said Lee Wood, regional director of engineering for Fisher Communications. Wood oversees engineering at Fisher stations located in Washington, Idaho, and California. Fisher operates 20 television stations, which include network affiliations with ABC, CBS, Fox, Univision and CW that reach 3.5 percent of U.S. television households, "We are committed to producing the highest quality new product possible," Wood said. "We chose the Wheatstone Dimension One TV audio console because it solved the immediate problem of maintaining reliable, high-quality audio mixing during live newscasts. Further, we felt that Wheatstone has led the way on many significant design innovations that make their consoles a good value."

KOMO-TV board operator Brian Cherry at the controls of the Wheatstone Dimension One. Only the audio console surface resides in KOMO's news production control room. All of the hardware for digital audio mixing as well as a 96x96 audio router is housed in equipment racks two floors away in the station's data center.

Since all of the audio sources connect to the digital Network First architecture, as opposed to being patched or hard-wired into the console, the control surface has immediate and flexible connection to every audio source which can therefore be delivered to any fader, including analog, AES digital, and 5.1 Surround Sound. This configuration can be changed on the fly—such as to bypass a bad mic while on-air.

"While we don't currently produce programming in native 5.1 Surround Sound, as an ABC affiliate, we do need to be able to pass-through 5.1 audio," Wood said. The Wheatstone Dimension One console has two 5.1 mixing buses, up mixing and down mixing between stereo and 5.1 sources, as well as panning controls.

"Another strength of the console that tipped it in our favor is its ability to automatically de-embed audio," said Wood. "This greatly simplifies accessing live audio for news considering that the rest of our plant is dealing with embedded audio." The audio is then re-embedded downstream of the console.

KOMO's Wheatstone console can also be placed under Sony ELC production automation control, which controls the console's basic functions, such as opening and closing mics and moving motorized faders.

Fisher was the first customer to purchase the console after its debut at the 2011 NAB Show. Brewer personally oversaw all aspects of the order fulfillment, including assembly, testing, and shipping of the console. Wheatstone consoles are made at the company's New Bern, N.C. facility, then shipped to broadcast customers worldwide. Once the audio console was set up at Fisher, Brewer flew to the station to do "commissioning" and training, and to ensure that it had been installed properly.

"The Dimension One console was designed to meet the needs of mid-market TV stations, both in terms of physical size and price," said Brewer. "In the case of breaking news or elections coverage, if a broadcaster needs more capacity than the board provides, a second control surface can be installed, for instance in an adjacent control room or edit suite. Both consoles then have immediate access to signals from the same audio router, and in fact, control B can feed Control A as a sub-mix." Control B can also serve as a back up to Control A during live shows.

"Wheatstone has a long track record of marketing audio consoles that are particularly well suited to live TV news," said KOMO's Lee Wood. "The Dimension One is a good solid console with more bells and whistles than you typically use in a newscast. But they're there if you get into higher-end production at some point. It really makes producing live local news more seamless."