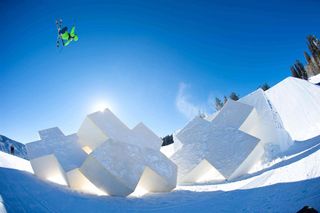 ESPN will once again cover the X Games in 3D for its ESPN 3D network.

ASPEN, COLO.—For the first time since it began covering the Winter X Games 10 years ago, ESPN is radically changing its coverage model. In the past, the sports network has completely produced its X Games programming on site. The integrated shows were then fed back to its headquarters in Bristol, Conn., for national distribution. But when the 17th annual Winter X Games opens in Aspen on Jan. 24 for a four-day run, ESPN’s raw action and host feeds will be sent back discreetly to Bristol for integration there. (ESPN now brands the summer and winter events as just “X Games.”)

Specifically, ESPN’s features unit will relocate from the event site to Bristol. It will acquire competition and ENG feeds by searching the remote site’s EVS network via IP Directors, and then transfer the files via fiber to Bristol.

When the feeds come in, ESPN’s Digital Center’s D7 control room will integrate them. and generate the three feeds—the ESPN telecast, a world feed to be distributed to rights holders, and a clean feed for editing. A Grass Valley Kayenne switcher and Calrec Apollo audio console will be used to produce the three feeds.

“We see this as an ‘Olympics-style’ approach to covering the X Games, in that the mobile units will gather the raw programming and it will be integrated into shows in a broadcast center,” said Stephen Raymond. As ESPN’s associate director of remote production operations, Raymond oversees the complete technical approach to the X Games. “It just so happens that our broadcast center for all these events will be in Bristol.”

By using this approach, ESPN will reduce the number of staff it sends to the X Games. This will save money on travel expenses, hotels, and per diems, plus cut the number of on-site video editors, feature producers, and a variety of support personnel.

“Shooting the X Games in this fashion will save us money, while maintaining the high level of quality that ESPN’s viewers expect,” said Severn Sandt, ESPN’s senior operations manager.

ESPN has a compelling reason to look for savings: The network has expanded the number of X Games it covers annually from three to six. The current X Games venues are Aspen, Los Angeles, and Tignes (France). Starting in 2013, X Games summer events will be hosted in Barcelona, Munich, and Foz do Iguaçu (Brazil).

“We sat down with our budgets, and looked for ways that we could streamline operations to make this expansion possible,” said Sandt. “Moving to this model does the trick. It is literally a way that we can ‘do more with less’.”

Just because ESPN is changing its coverage model doesn’t mean its equipment presence in Aspen and subsequent venues will be reduced. In fact, as in previous years, the network will deploy NEP’s Supershooter 21 (SS21) and Supershooter 32 (SS32) at the X Games site, plus two of Cameron Pace Group’s (CPG) “Shadow” 3D units.

Jacob Wester competes in the Men's Slopestyle Eliminations at Winter X Games 2012. The games will be produced in the fashion ESPN has dubbed “5D.” SS21 and SS32, each paired with a “Shadow” unit, will acquire content in 3D. The “left eye” of this coverage will be used for the 2D feed, while both eyes will be combined to create the 3D content. CPG will provide 29 3D cameras via its two “Shadow” units. These 3D units use camera systems made by Sony and Toshiba.

To support its new approach, ESPN has made a few equipment changes and upgrades.

“We’re using a new set of Adtec encoders to handle up to 16 audio channels on each video path,” said Larry Wilson, ESPN’s manager of remote productions. “The additional discrete feeds required with this updated workflow will populate the 15 broadcast lines we’ll be running back to Bristol. These are up from the six we needed in previous years when the shows were integrated on site.”

ESPN has also added a new Harris 128x128 3G embedded router. Tied to a 16x16-port MADI router, this system will move video and audio signals around the remote plant TOC with minimal latency.

On the shooting side of the equation, “We have upgraded our handheld 3D capability, with some new compact and lightweight CPG beam splitter rigs integrated with Sony HDC-P1 cameras,” said Raymond. “This new rig uses larger imagers than those found in previous handhelds, providing us with higher quality 3D images and better lens performance.”

ESPN has also upgraded its CPG ultra-mo 3D rigs to support 13 axis of remotely controlled motion. This will allow more precise alignment of these rigs without electronic image manipulation, ensuring that both live and replay images maintain the best possible 3D geometry. ESPN shouldn’t find its new method of shooting too daunting in Aspen, where the freelancers all speak English. But things will be more difficult in Foz do Iguaçu, where the local crews speak Portuguese.

In that venue, “I expect that our director will be sitting beside a person who will provide simultaneous translation to 90 percent of the camera operators, who will be local hires,” said Sandt.

Add the fact that ESPN doesn’t have the budget to pre-train local crews before their local X Games begin, and things could be a bit tense for the network on Opening Day. But ESPN is willing to take calculated risks in order to substantially boost its X Games coverage.

“Our people are really excited to break in this new way of covering the X Games,” said Mike Barlow, ESPN’s senior director of production operations. He will oversee the personnel and facilities that will act as the Broadcast Center in Bristol. “We see it as a risk worth taking, in order to double our X Games events on a budget.”