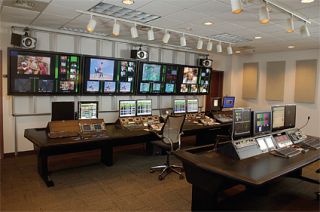 SAN FRANCISCO — The slew of dips experienced by the broadcast market over the last several years revealed some ugly disadvantages—from job loses to equipment purchase stagnation—but those lulls have in turn led to the development of more streamlined, refined broadcast facilities.

But today’s modern master control facilities are designed to do even more: handle an ever-larger cadre of responsibilities, execute tasks seamlessly, coordinate an expanding roster of channels, and do it all with fewer trained operators.

“Today everything is about the economy of scale,” said Paul Roston, president of Mount Prospect, Ill.-based Roscor. Stations are asking ‘if I can automate five stations into a hub-and-spoke operation, [can I only employ] one or two operators to monitor events?’”

For a number of systems integrators, the answer to the cost-cutting query has come in the form of centralization: by centralizing master control operations and controlling numerous stations from one location, broadcasters can slash costs in the area of technology acquisition, personnel and training.

Stations are seeing the advantage of “controlling five stations over a broadband network and sending assets out to stations ahead of time, while controlling the broadcast itself from a central location,” Roston said. “It all depends on the costs.”

Centralcasting was the right solution for ABS during its redesign of several Cowles Publishing Company stations in California in 2009. The firm is now in the midst of building a push and edge master control model for three NBC network affiliates in Spokane, Yakima and Pasco, Wash.

But like any technological innovation, the centralcasting setup has its own difficulties. A majority of broadcast stations have migrated from the simple reception of content via satellite to a complicated mish-mash of digital media formats. As a result, master control environments are required to evolve to handle the difficulties associated with downloading and transcoding these different formats.

Thus, the challenges inherent in setting up a hub-and-spoke master control environment often surround the ingest of content. “In an automated facility, play-out is relatively simple; it’s ingest that is more complicated,” Siegel said. “The migration to new formats has caused difficulties in how [stations] now deal with these files. The files aren’t simply native MPEG-2; there’s difficulties with transcoding and the time it takes to deal with these files.”

“Sources come in various formats, from tape to IP media, and they all need to be converted to a common production format,” said Jim Conley, senior vice president of engineering for Communications Engineering Inc. (CEI), a Newington, Va.-based systems integrator that worked on master control facilities at the 62,000-square-foot technical facility owned by Rainbow Network Communications. “To get [everything] to 16:9 full screen for all the branding and mixing necessary, that’s a real challenge [during] input.”

Across the board, master control is also now forced to deal with an ever-larger number of channel counts. As the nation transitioned to digital television, stations were focused on broadcasting their primary digital channel. “But channel counts are starting to go back up,” Siegel said, now that broadcasters are beginning to broadcast secondary SD channels along with their primary HD channel.

Master control has been tasked to make that—and other never-before-considered scenarios, like the proper processing of 3D programming when adding logos, for example—a reality. And all this is being done with fewer trained personnel sitting in the control room.

Making the most of efficiencies was a key goal behind the design of Rainbow Network Communications, the networking programming origination and distribution facility built in a former aircraft hanger in Bethpage, NY. In addition to an upgrade from SD to HD, CEI worked to design several master control rooms in a cluster node design, “which allows us to build and expand the facility in blocks,” Conley said.

Master control is also tasked with the tricky process of creating a consistent product across multiple stations—with fewer people—and in handling the issue of station branding to ensure that a station’s ID is presented uniformly to the market.

But it’s not enough to simply trim down costs by adopting a centralized model. Even though modern master control designs are helping reduce costs and improve efficiencies, “you cannot do television without people,” Siegel said. “Broadcasters need to take the resourses gained from centralization and deploy it to other departments, namely programming, to improve the creation of content,” he said.

“Broadcasters have to produce more content in order to remain viable, because their traditional advertising pool is being fractionalized by Web, mobile, cable and the like,” he said. “The key is to put people in the areas where you are going to make money: and that’s in the area of creating content.”