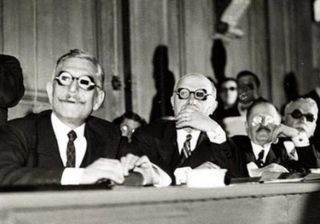 “The EBU believes that public service broadcasters must take a pragmatic approach to 3D services and they should be aware of the value of an event or program to its audience when making decisions about producing and broadcasting in 3D,” EBU’s Technical Report 10 states.

The medium is on the march, based on display projections. The report says that by 2014, more than 40 percent of all displays will be 3D capable. Europe is expected to finish 2010 with 600,000 3D devices in the market, with the figure growing to 3 million by the end of next year.

On the content side, 3D gives rise to further question about rights, which could be negotiated separately.

“The current position of 3D rights is unclear, and public service broadcasters must pay close attention to developments in the discussions of 3D rights,” the EBU said.

In terms of creating content, a new set of parameters must be considered, much the way the widescreen aspect ratio of HDTV gave rise to center protecting for 4:3. With 3D, screen sizes are ranging from a few inches in mobile devices to cinema-sized and IMAX screens.

“Making 3D that is OK on all screen sizes may be just that; OK but not stunning. This means that 3D content produced for the cinema requires post-processing to work adequately on consumer-sized displays, and vice-versa. Not following this guideline will generally lead to unsatisfactory results,” the EBU said.

The 15-page briefing includes a summary of the history of stereoscopic moving images, which have been around since the early 20th century. The first 3D film was said to have been shown at the Ambassador Hotel Theater in Los Angeles in the fall of 1922.