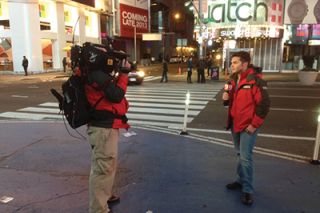 SEATTLE—Bonded cellular liveshot systems, which “bond” multiple cellular modems together to transmit enough bandwidth to deliver high quality television news audio and video from the field to the studios, have been in use for television news audio and video transmission for about a half dozen years now. Because last fall’s Hurricane Sandy hit hard in so many media markets along the East Coast, bonded cellular technology was front and center on display for local broadcasters and network news live coverage alike.

Before getting into the important advances that individual bonded cellular designers have built into their most recent products, it’s only right to share the credit of covering Sandy with the cellular carriers which have upgraded their systems with more (and more reliable) cell towers, and their migration from 3G to 4G.

IMPROVED CAPABILITIES
Ken Zamkow, director of sales and marketing for bonded cellular transmission pioneer LiveU, said changes to their equipment in the four years production models have been shipped have been incremental. “Every year, roughly, we come out with a newer unit that has stronger encoders, stronger processor, more memory and so on.”

He pointed to what his company has learned about the behavior of cellular networks. “It’s easier for us now to anticipate when there may be a drop in signal for a certain card, or to identify patterns and to know how to more efficiently send the data back with minimal loss of data.”

Zamkow also said LiveU has designed a proprietary antenna array for the transmitter that provides a stronger signal than a standard cell phone antenna. “When you have a lot of devices competing for the same signal, our antenna knows how to hone in on the cleanest and clearest path.”

LiveU has designed a proprietary antenna array for the transmitter that provides a stronger signal than a standard cell phone antenna. User-friendliness was a major aim when TVU Networks developed its TVUPack, according to TVU Networks CEO Paul Shen. “We did not design it for computer specialists… you turn the power on and within 30 seconds of that, it goes live. So for news reporters, the last thing they will have to worry about is how to operate the equipment.”

One process that works without operator intervention is TVU Networks’ proprietary Inverse StatMux technology, which dynamically segments a live video signal and adjusts the signal in real time to ensure that each 3G or 4G connection is optimally utilized.

Shen noted development of the TVUPack Mini SE, purpose-built for integration with Sony XDCAM shoulder-mount camcorders. The Mini SE mounts between camcorder and battery, and plugs into a 50-pin connector on the camcorder. “With the 50 pin connector, the pack will be an integral part of the camera.”

CAMERA CONSIDERATIONS
Devens, Mass.-based Comrex is slated to begin shipping its first bonded cellular video system, called “Liveshot,” as this issue is going to press. The Liveshot is designed with Anton/Bauer Gold Mount attachments, so that it can fit between the camcorder and its battery. (V-mount conversion accessories allow it to be similarly positioned on V-mount camcorders.)

Teradek’s small-sized bonded cellular transmitters, called Bonds, are about the size of a deck of cards. Comrex director of sales and marketing Chris Crump said the Liveshot benefits from Comrex technology developed for its existing audio transmission products and by utilizing H.264 encoding profiles not used by others. “It was a lot harder and we spent a lot more time to get it right, but everyone that sees it likes the video quality and can’t believe the [lack of] latency,” he said.

Crump said there will also be a single RU rackmount version of the bonded cellular device.

Because a cameraman has to lug a bonded cellular transmitter around, size—or lack thereof—is important, according to Gary Kenning director of marketing for Dejero in Waterloo, Ontario. With its LIVE+ 20/20 transmitter, “we’ve essentially put it in the dryer and shrunk it. It’s less than half the size that it was a year ago.”

Kenning also pointed to advances in Dejero’s H.264 encoding, where they’ve worked “to be more efficient from a code perspective in terms of how do we send more with less data or bandwidth.” He said it’s been a two-pronged effort.

One issue is “how do you deal with lower bandwidth environments better?” And on the other hand, where there’s high bandwidth 4G connectivity, “how do we really push the limits of that, and get across highquality HD video with really low latency?”

Looking internationally, he pointed out that while the United States is seeing a lot of 4G cellular, “in most of the world, if you’re looking at being a worldwide supplier, 3G is just about as good as you’re going to get.”

McCulley said that Vislink “is very mindful of our legacy microwave business, and so we’re trying to do some hybrid systems, especially for broadcasters, where they can have a box that will do licensed microwave and cellular, to have the best of both worlds.”

Streambox recently unveiled its Avenir Mini, much smaller than its current Avenir 2, using its same encoding software and capable of camera mounting to A/B Gold Mount or V-Mount, or carrying in a side pack.

“If you get in a highly congested area, downtown, where here’s a lot of people and a lot of buildings, and many, many people on cell phones, there’s a real value to the amplification of the embedded modems and the high gain antennas.”

Teradek’s small-sized bonded cellular transmitters, called Bonds, are about the size of a deck of cards, according to Jon Landman, vice president of sales for the Irvine, Calif.- based company. “We’re very well-liked by the cameramen because we’re not a big, heavy backpack.”

The Teradek Bond sports USB ports where cellular modems can be plugged in. “Stations can all negotiate their own deals with their local carriers, which means that smaller stations can leverage local advertising, and do trade-outs,” said Landman.

He pointed out the simple system of color-changing LEDs gives the cameraman in the field an easy way to assess his cellular connections. If an LED light by a modem’s USB port “is red, it’s not connected. If it’s orange, the modem is connected by not sending data. And if it’s flashing green, it is sending data. The faster it flashes, the higher the bit rate.”

Joe Giardina, CTO of DSI RF Systems in Somerset, N.J., said his company took a different tack on bonded cellular devices because their designers came not from software backgrounds but from the RF transmission side. In fact, their RF bent led them away from “bonding” altogether, to a product using a single, optimized modem with a dedicated, high-gain antenna.

If you take six or eight antennas from closely located individual modems, he said, “with that many RF antennas that close together, there’s got to be interference, mutual coupling, mutual interference.” With a single, stronger signal, “the cellular system gives me more [and more reliable] bandwidth.”

To allow the single modem design to provide quality video has required DSI RF to develop what Giardina refers to as “uber efficient codecs,” which allows them to deliver 720p HD at 1.5–3 Mbps. Giardina pointed to an ancillary benefit to skipping the bonding steps is a reduction in the need for attendant “bonding processing,” which results in a lower latency.

Each company in the bonded cellular game has its R&D department burning the midnight oil to make their systems even more reliable. And several of them noted the looming issuance of a final draft of the H.265 (High Efficiency Video Coding) video compression standard. If H.265 cuts the encoded signal bit rate in half with no loss in video quality, as is predicted, even better bonded cellular performance can be expected.