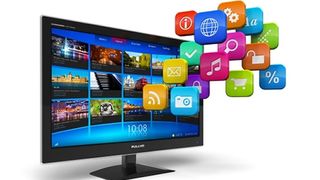 Television viewers appear not to see their HDTVs as much more than a display for video-centric content despite the efforts of set makers offer sets with direct Internet connectivity and access to all that the Web has to offer.

That’s the main takeaway from new research from The NPD Group. Writing in a blog on the research company’s website, John Buffone, director, Devices NPD Connected Intelligence, summed it up this way: “On the positive side, the TV itself remains the fundamental screen for TV viewing within the home and is seeing an expanded array of programming through OTT services that supplement Pay TV subscriptions. The less than great news is that the TV manufacturers are failing to make the TV more than, well, a TV.”

New findings revealed in the “NPD Connected Intelligence Application & Convergence” report show that while nearly 60 percent of consumers who own a connected HDTV access OTT video services via the television, using the set to participate in other Web-related activities, such as using Facebook and Twitter or browsing the Internet, is largely a flop. Less than 10 percent of consumers with connected HDTVs use the display to do things like visit Facebook, read books or magazines, upload videos, shop or play “free casual games,” the report says.

One exception is listening to OTT music via services like Pandora. According to the findings, about 15 percent access OTT music via their connected HDTVs.

Buffone notes that part of the problem may be consumer confusion stemming from the multiple methods available for connecting an HDTV to the Internet. Devices like Blu-ray Disc players, game consoles and TiVo used with connected HDTVs are creating two separate Internet-connected ecosystems for many consumers and in the process the probability of increased confusion.

“Content throwing,” the emerging consumer technology that allows content to be transferred from a smartphone or tablet to an HDTV is likely to increase consumer confusion.

If the HDTV is ever to emerge as the hub for applications beyond television in the home, manufacturers must focus less on innovation and more on simplification, Buffone advises.