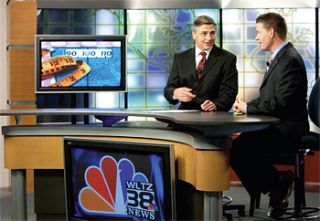 DAVENPORT, IOWA
Davenport is home base for the decade-old Independent News Network, which currently serves 16 station clients in 15 markets from Maine to Nevada. INN's newest affiliate, KPTM-TV in Omaha (DMA 76), a Fox station, begins airing its INN local hour-long 9 p.m. newscast on Sept. 6. Besides Fox, INN's clients include affiliates of ABC, CBS and NBC, as well as Spanish-language Azteca America.

INN President Jeff Lyle said the idea behind what has evolved into INN was not simply to create a way for local stations to save money by avoiding full-blown news operations. "As we rolled through our first year 10 years ago, we looked at the 22 people we had doing our show in Davenport [at KLJB-TV] and wondered if we could do more than one newscast at one station," Lyle said. "This was back when Fox was pushing for its stations to do local news. So we went through a testing process," and the concept took off from there.

Lyle said its model is basically the same as what local news stations already deploy—except its anchors and production team are centrally located outside the market. "Nothing changes on the local front. Stations are still using local reporters and photographers, and we're in contact with them all day long on their stories," Lyle said.

INN's operations rely on satellite, fiber and IP for feeding produced newscasts—while during the day raw material is often fed between stations and Davenport via computers using IP. Lyle said INN gathers and mixes the locally produced material and adds graphics and regional material, notably weather, before sending the produced package back to the station for airing. Newscasts can be recorded slightly ahead of airtime if the client wishes to feed it from its own server (which often is the case), although some casts are aired live. The news can be fed in SD or HD. "We usually produce about 15 shows a day, spread across all four time zones in the continental U.S.," said Lyle.

News Director Drew Rhodes of WLTZ-TV in Columbus, Ga., (DMA 128) said a small percentage of his viewers probably are aware of INN's remote-anchor system. "It depends on who you talk to. News junkies are aware the anchors are not local. That bothers some of them. Others don't care." Unlike some other INN stations, WLTZ-TV did not switch from a local news operation to a less costly one. When it brought INN on in late 2007, the station had no local news at all. "It was more cost-effective to use INN than to [start from scratch] and do it all ourselves," Rhodes said.

Rhodes currently shares the cost with other INN stations of two news anchors, a weather person, one sports anchor, a production crew, and one producer for three daily newscasts. "So the biggest chunk of savings would be in personnel costs. My savings probably are around 50 percent of what those positions [typically] would cost in my market," Rhodes said. "But I don't have the capital investment or the maintenance costs of an HD studio set and HD cameras."

INN News Director Scott Kinrade (left) and INN Chief Meteorologist Pat Walker in Davenport, Iowa, on the set for one of three daily newscasts for WLTZ-TV in Columbus, Ohio. Rhodes is satisfied with the control he has over the final product. "For local news, you communicate throughout the day via e-mail, phone, text, and so on. We do that, too, with INN. Technology really makes it all seamless."

Consultant Jimmy Schaeffler, chairman/CSO of The Carmel Group in Carmel, Calif., says the INN model makes it well-suited to today's dubious economy. "Economics are strained and anything that reasonably moves that budget dollar downward, while still maintaining overall quality—i.e., the 'look and feel' of a local presentation—may be a very solid long-term answer for certain-sized markets," Schaeffler said.

For the INN model, Whitney believes "the key to successful local coverage lies in keeping those locally based reporters on the ground. You simply can't replace 'feet on the street.' Perhaps the 'look' of the news comes from a central location, but if reporters are located within the community, I would expect the coverage is as good as it can be."