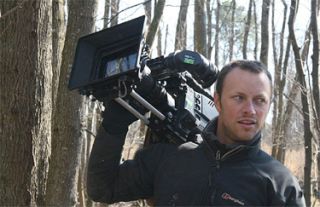 LOS ANGELES—For six seasons of the popular Discovery Channel series, "Man vs. Wild," ex-U.K. Special Forces trooper/survival expert Edward "Bear" Grylls has demonstrated how to survive the most inhospitable environments known to man, including the frigid temperatures of the Arctic Circle, the blistering heat of the Mojave Desert, and the untamed jungles of Vietnam.

Simon Reay "Man vs. Wild" is more of a "how-to" program than a documentary—and as such, Grylls receives a certain amount of production support from the crewmembers following him. Whether jumping from a helicopter, rappelling down a slick cliff wall, or scaling the side of a volcano, they go where Grylls goes (with support from a special safety team, led by ropesman David Pearce), and after their host, series cinematographer Simon Reay is usually first into the fray. In this interview with TV Technology sister publication, DV Magazine, Reay discusses the challenges of shooting in hostile environments:

DV: Simon, what's your background? Do you have any previous experience that qualifies you to shoot Man vs. Wild?
SIMON REAY: I never deliberately pursued this type of photography and I don't think my background qualifies me for what I do now—one of my first jobs was as a camera operator on "Teletubbies"—but I do have an aptitude for it. I have worked on various documentaries, dramas and commercials, but "Man Vs. Wild" is easily the most physically demanding and longest running job I have ever had.

DV: How big is the crew?
REAY: Over the years we've formed a tight knit crew who learn from each other and our experiences. This plays well with Bear because his background in the military means he's at his best with small teams who know each other well and can adapt to new situations and environments together.

DV: What kinds of cameras do you use?
REAY: The camera package has changed significantly in five years due in part to advances in technology, and also because I have eliminated all the unnecessary items, such as a tripod. Nowadays the kit list stays the same irrespective of the location; I'm proud of that.

Season 1 was shot on DigiBeta with a Sony DVW790 and Canon J22 and J11 lenses and a Sony Z1 for water work. This worked well in the early days, but by the end of Season 1 our ideas were advancing beyond the capabilities of these cameras.

With Season 2 the action sequences were beginning to get bigger, so we had to come up with a way of showing scale while maintaining the audience's perspective of traveling with Bear. I never wanted to repeat the action for alternate angles because this would dramatize the event and give the impression that there was more than one camera following Bear when there isn't.

We decided to use the Panasonic Varicam AJ-HDC27 which has the ability to shoot 60fps and enabled us to film Bear off-speed and give the audience a longer look at the action without changing angles. The Z1 was replaced because we started jumping out of a helicopters into the sea from anywhere between 6ft and 50ft and it couldn't cope with the impact, so we switched to the P2-based HVX200, which handled some serious impacts amazingly.

Having developed a tape and data workflow, we felt we could eliminate tape completely, so for Season 3 we moved to the Varicam AJ-HPX2700. We are now completely P2-based, but we went through an evolutionary process before we made it the format of choice.

The lenses have changed to Canon HJ versions of the J22 & J11, the latter only being used for certain action sequences such as climbs where I need to show height or a greater sense of perspective. I always shoot the actuality scenes on a narrow lens so as to force the audience's eye to look at a certain part of the frame rather than let it wander about.

There are other cameras that we carry which have also changed over the years. Currently, these are a Sony CX11 for infra red/night vision and a Sony HVR-MRC1 with Century adaptors for free-fall and under canopy work. Go Pro's are also used, often strapped to Bear's wrist for some climbing sequences. (I'm not a fan of this mounting technique because it gives a very "dead" feel to the shot—I much prefer a slightly bigger camera which he has to operate while climbing.)

DV: Out of all the cameras you've worked with, what's your preferred model?
REAY: I love the Varicam. Ever since I first used the AJ-HDC27, on through to the AJ-HPX2700. The images it produces just feel right to me and the viewfinder shows contrast and focus better than anything that has gone before it.

I don't own any equipment because I believe in picking the right camera for the right job. Instead I have a wonderful relationship with Axis Films/OnSight at Shepperton Studios, who have been providing equipment for me for 10 years.

How do you secure the safety of your gear from the elements?

All water work is shot with the HVX171 inside a custom housing from Scubacam in London. The housing itself is a steel bracket incorporating a front element with the outside wrapped with a thick flexible clear plastic. It's perfect for our application because it's so light and strong. I was using it in the Canada show when I collided with Bear.

When dealing with ice I use the same Scubacam housing, but I use a remote control in an Aqua Pac because the Scubacam's plastic freezes and I can't access the buttons. With fire, I wrap the Varicam in fireproof blankets and try not to hang about in the same spot for too long!

The Scubacam housing also protects the camera from falls, and often the corners of the front element snap on impact but it remains waterproof for a while. We carry spares for this.

DV: Have you ever really trashed the gear?
REAY:Not the cameras, but I have gone through a few filters. Apart from when I'm filming in the jungle, I will have a Schneider 138 circular pola and a Tiffen Haze 2A permanently in front of the lens. The latter is at the front so gets more abuse.

DV: What's the scariest thing you've done on the show?
REAY: I would have to say standing on the wing of a bi-plane rates quite highly – but this was also great fun. In reality, thrashing through the jungle, not knowing what you may come across, is far more dangerous.