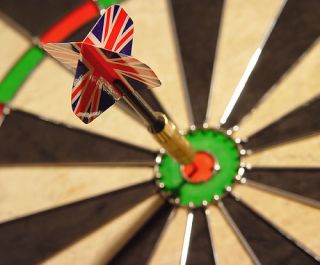 LONDON: BSkyB pioneered delivery of 3DTV with the first limited launch of a 3D channel in April to take advantage of the build-up to the 2010 World Cup. Now, Sky’s trying a whole new sport in 3D--darts. Darts will become the fifth sport covered in 3D by the provider, which has previously covered soccer, two forms of rugby and cricket in the format.

The World Matchplay Darts tournament at Blackpool’s Winter Gardens commences July 17 and runs through July 25, culminating in the championship. The July 24-25 coverage will be carried on Sky 3D to around 1,000 pubs across the United Kingdom and Ireland.

Sky said the coverage “will feature an additional seven camera rigs, including two cameras above the dartboard--the size of ice cubes--to enhance the image of darts flying through the air in 3D.”

Commentator Sid Waddell, the “voice of darts,” said 3D coverage represented a revolution in the sport.

BSkyB plans a residential launch of its 3D service later this year when it figures more 3D-capable TVs will be available.
-- Deborah D. McAdams