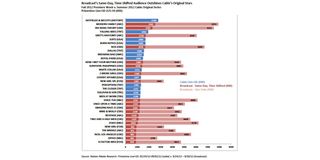 NEW YORK– TVB, the not-for-profit trade association of the U.S. commercial broadcast television industry, released an analysis of TV ratings for the first week of the 2012-13 broadcast season.

Among its findings, the report indicates that the time-shifted portion of broadcast television’s same-day Top 20 fall premieres outpaced the total audience, both live and same day, of the majority of cable’s highest-rated original summer programming. This indicates a reversal of the last several years’ trend in 2012.

“Cable networks have moved swiftly over the last several years to introduce high-profile original series during the summer at a time when broadcast television networks are primarily offering repeat programming,” Stacey Lynn Schulman, senior vice president and chief research officer of the TVB, said. “However, the audience for broadcast television in the summer season continues to significantly dwarf the audience for cable television’s first run programming which includes a number of critically acclaimed series.”

Advertising-supported cable posted year-over-year decreases in the primetime daypart across Households, Persons 2+ and Adults 25-54 in both the summer and regular season of 2011/12. On a Household basis, decreases were more significant during the regular season (-4 percent) than in the summer (-2.6 percent), demonstrating that the Summer Olympics was not the only factor.

Additionally, cable’s summer season showed all major programmers with declines among returning series (ranging from a decline of 1 percent on A&E to 23 percent on USA). Only a few (namely, AMC, History and TBS) introduced new programming that gave as strong a performance as returning series.

Within summer’s original seasons, broadcast television commanded 94 percent of all A25-54 GRPs among the Top 100 telecasts. The broadcast dominance was not related to the Summer Olympics, as the percentage of GRPs rose to 96 percent when sports programming was excluded.

“Understanding where viewership happens is a critical consideration toward determining the success or failure of an overall marketing plan, and that viewership is definitively and materially biased toward broadcast television,” TVB President and CEO Steve Lanzano said.

More information regarding the analysis and a list of sources used is available at: http://tvb.org/media/file/TVB_Summer_Primetime_Belongs_to_Broadcast.pdf