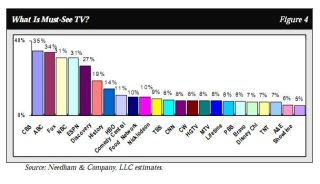 NEW YORK: Give us the Big Four before we cut the cord, 300 people told Needham & Co. analyst Laura Martin.

“Please list which TV channels you must have available online for you to turn off your TV subscription.” That was the question posed to the group of multichannel subscribers pinged by Martin in October. CBS, ABC, Fox and NBC were the top four, in that order.

“We found that if folks listed one broadcaster, they generally listed them all,” Martin wrote. “They think of the four broadcasters as a monolith. This may be because they have no idea which networks their favorite shows are on.”

However, the fact that CBS was at the top and is also the No. 1 rated network somewhat belies that. NBC, which lags in the rating among broadcast nets, tied in necessity with ESPN, the top cable network folks had to have access to before canceling their pay TV subscriptions, aka “cord cutting.” Next was Discovery, followed by History and HBO.

Martin said the HBO response was surprising, given that it’s limited subscriber numbers would translate to a rating equal to the broadcast nets when considering equal audience size. The revelation may reveal something behind Time Warner chief Jeff Bewkes’s reported intention to turn HBO into an a la carte network.

The Needham surveyed were also asked how much they would pay for per month for their favorite 20 channels. More than half said less than $20. However, for nets like Comedy Central, a necessity for 10 percent, people said they’d pay nothing because they can get the programming online.

The phenomenon played into Needham’s value analysis of four primary network types. I.e., cable networks that rely on reruns will have difficulty taking that content online without paying additional copyright fees. Cable nets full of original content like cooking shows, bike races, music and dance contests are not well-positioned to charge for it on the Internet.

“Sports is a unique animal,” they said. “Ratings are up strongly in 4Q10. . . but sports has no library value because the leagues own the copyrights. Monopoly Rents theory says that the strongest leagues will try to negotiate for every dollar of value created over time.”

Needham analysts concluded that content with the highest “real-option” value appeared to be successful series on broadcast networks that could be sold internationally and into multiple syndication cycles.

“This analysis of shifting risk profiles among content companies makes us like the successful broadcasters that air many dramas--dramas travel better offshore than comedies--and who own the copyrights and all distribution rights on all platforms.”