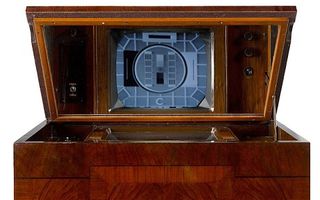 LONDON: A 75-year-old TV set is expected to fetch £5,000, according to The Telegraph. A 1936 Marconi, said to be Britain’s oldest working TV set, is for sale. The set was purchased by a Londoner for just under £100 in November ’36, when TV signals were being transmitted from the Crystal Palace in Penge Common. The structure would burn down within days of the man’s purchase, and TV signals would not again be transmitted in London for a decade.

The Telegraph says the set has had two owners in the last 75 years, and that there are more “18th century Stradivarius violins in existence” than pre-WWII TV sets. The Marconi looks a bit like an old-school record player in a mahogany and walnut case with a flip-up lid. It has a 12-inch screen that’s reflected in a mirror inside the top of the case.

The set will be sold at Bonham’s Mechanical Music and Scientific Instrument Sale April 19. The Telegraph has more details.