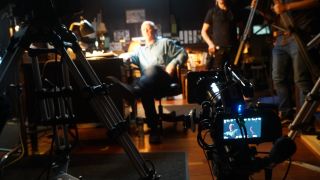 FREEMONT, Calif.—Blackmagic Design was part of the production of FX’s new docuseries “The Most Dangerous Animal of All,” specifically the Pocket Cinema Camera 4K and the DaVinci Resolve Studio.

Documenting Gary Stewart’s search for his father, who he believes may be the infamous Zodiac Killer, director or photography Zak Mulligan and his crew used two Pocket Cinema Camera 4Ks. They cited the cameras’ small grip package, light frame, that it can “rig anywhere,” ability to fit as a single carryon and its cinematic image quality as reasons they opted to use it.

“We wanted to work with the most dynamic range and color information we could get out of the camera, and I was surprised at how well we could match the Pocket Cinema Camera 4K footage,” Mulligan said.

In addition, the production used the DaVinci Resolve Studio for color grading.

“The Most Dangerous Animal of All” premiered on March 6.