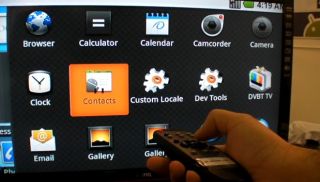 The Bonux set-top box runs on a 700 MHz ARM11 CPU that handles 1080p, according to CrunchGear, which has a video of the exhibit. The remote will have a touchpad controller, possibly with Bluetooth support. The set-top, equipped with an HDMI port, is supposed to go on sale by the end of the year for $120 to $130. (Engadget has a gallery of images of the device here.)

Google confirmed its Android TV plan in early May after months of speculation about the venture. (See “Google TV Revealed.”) Through a partnership with Sony and Intel, Google’s Android operating system and its Chrome browser will be incorporated into Sony TV sets. Android-powered Sony sets are set to become available this fall.

Swedish TV maker People of Lava announced plans in April to make Android-powered TV sets. Its Scandinavia Television line will come in 42-, 47- and 55-inch models. The initial specs on the Scandinavia line did not include the U.S. DTV standard. No release date was announced for the PoL Android line.
-- Deborah D. McAdams