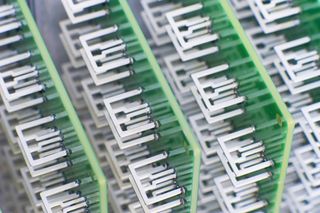 Aereo has a vision. It wants to bring free, broadcast television to anyone, anytime to any device over the Internet.

With the deep pockets of entertainment mogul Barry Diller behind it, Aereo is a serious challenge to traditional broadcasters that think the whole enterprise is illegal because they are not getting paid for programming they own. However, a federal judge has already ruled in favor of the start-up and the broadcasters are appealing.

In the meantime, Aereo says it is expanding to 15 or more cities.

“The goal is not to recreate the cable companies but to create an alternative for people who are coming into television from the Net side first,” Chet Kanojia, Aereo’s founder and chief executive, told the New York Times. “There’s an emerging population of people who have never signed up for traditional cable packages, who are used to customizing their own TV experience.”

Aereo uses an HTML5 interface, which works on the Safari browsers for Apple’s iPads, iPhones and Macintosh computers, as well as Apple TV and Roku STBs. Support for additional devices is coming.

The IP-based service was carefully crafted to avoid legal challenges that the broadcast industry has traditionally won. On the ninth floor of a former tire factory in Brooklyn, Aereo uses sheets of steel covered with rows of tiny, thumbnail-sized TV antennas. The service picks up local broadcast channels and streams them over the Internet to any device that supports HTML 5 protocol.

For fees from $8 to $12 a month depending on the amount of storage, the user also gets a software-based DVR for recording and watching programming on-demand. Lower cost options include a $1 day pass and a free hour of live television a day.

Aereo said it is simply renting the antenna to its users, just as a Radio Shack might do in selling a customer a TV antenna for viewing. Broadcasters argue Aereo violates their copyright, since Aereo is not paying them for the broadcast signal. The stations want to shut Aereo down, but the company has won a preliminary round in federal court.

Traditionally, repackaging television transmissions without permission or payment is considered illegal. Aereo, however, worked around that obstacle. It assigns each subscriber two antennas, allowing live viewing and recording at the same time. A subscriber watches only the programming that those antennas pick up. This, argued Aereo, is no different than owning ann antenna and VCR.

In New York City, Aereo has a clear view of the Empire State Building, the transmission antenna location of most of the local TV stations. The signals are converted to an Internet-friendly format and streamed live or stored for customers.

“A single copy for a single user is not a copyright issue,” Kanojia told the Times.

Although broadcasters lost the original round in court, they have appealed the ruling and say they will not stop until Aereo is out of business. “We believe that upon appeal, Aereo will be found to be a copyright infringer in violation of the law,” Dennis Wharton, the NAB’s executive vice president for Media Relations, told the Times.

Another issue for Aereo faces is luring new customers. Dan Rayburn, an analyst at the market research firm Frost & Sullivan, told the Times that the Aereo service would only appeal to a niche audience at best.

“Aereo says a large market would be 300,000 subscribers, but that’s not even 1 percent of the entire market of people who pay for TV in the United States,” Rayburn told the Times. “That’s not disruption.”

Another analyst disagrees, noting that Aereo is just starting out. “People are quick to call this company a failure because they don’t have any subscribers yet,” Richard Greenfield, an analyst at BTIG, told the Times. “But it’s a company that is just in New York right now. Consumers love these devices, they love playing on them and Aereo is playing into that.”

If Aereo succeeds, Greenfield said, it could start to chip away at the existing television business model. “It might lead to a larger breakdown in the bundling of content over time, and that could be really interesting.”