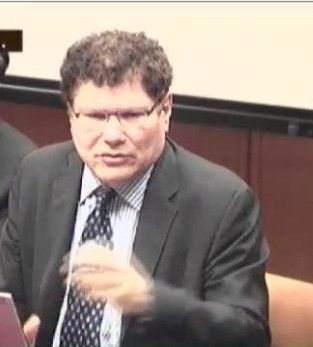 WASHINGTON: Advanced video compression is unlikely to free up TV spectrum for broadband. At least any time soon. This was the upshot of one of today’s roundtables at the FCC’s Broadcast Engineering Forum. Andy Setos of Fox Broadcasting (pictured left) delivered the findings this afternoon.

“As you might know, DTV uses MPEG-2,” he said. “It was completed in 1992 and published in ’94. Here we are 12 years later... no meaningful efficiency improvements are expected for MPEG-2.”

The commission is looking to reallocate 120 MHz of broadcast TV spectrum for its Omnibus Broadband Initiative. Channel-sharing was proposed as one option for TV stations, but MPEG-2 doesn’t support such a scheme, especially in an increasingly high-definition environment, Setos’ group said. He was joined by Richard Chernock of Triveni Digital, David Converse of ABC, Greg Coppa of CBS, Sterling Davis of Cox, Matthew Goldman of Tandberg Television/Ericsson, Brett Jenkins of ION, Glenn Reitmeier of NBC Universal, Mark Richer of the ATSC and Peter Sockett, of Capitol Broadcasting.

“The OBI document proposed two stations sharing a single channel,” Setos said. “This would require severe constraints on programming options.... One or both of the HD services would be degraded under these conditions.”

There are examples of channel-sharing through the use of multiplexing, but it’s carried out under extensive planning and typically by stations under single ownership, Setos said. Also, while MPEG-2 encoders have improved over the years, it’s usually at the expense of resolution.

“You’re forced to create a winner and a loser in the HD streams, when one instantaneously exceeds the bandwidth stream of another,” he said. Both HD signals likely would be degraded.

“The other option suggested was using statistical multiplexing, or statmuxing,” Setos said. “Statmux efficiency is dependent on the mix of content.”

Bandwidth requirements are determined on a frame-by-frame basis, and so are not under a broadcaster’s control. Bandwidth requirements of commercials especially are not under a broadcaster’s control. Statmuxing two HD services requires, again, picking a winner and loser, the group concluded. The loser would be put at a disadvantage. Statmux efficiencies are lost with two separate licensees.

“Conservatively, there are 100 million DTV sets in homes, not to mention converter boxes,” Setos said. At minimum, the group concluded it would take 13 years to realistically implement MPEG-4 Part 10.

Setos noted that the OBI suggested combining HD and SD-only stations, but those opportunities are dwindling. Licensees are still migrating to HD. Setos said all of Fox’s owned-and-operated stations have transitioned to HD news, and produce about five or six hours of it a day. And just about all major league sports is in HD, and scripted content is around 90 percent in HD. Also, 75 percent of the commercial advertising on Fox is in HD. The industry trend is toward 100 percent HD, he said.

“All these programs are being produced in HD. SD equipment is no longer being manufactured,” he said later during the Q&A. “The fact is, if you took, a snapshot of viewing... the density of HD content is extraordinarily high. We simply observe that this is a real trend.”
-- Deborah D. McAdams