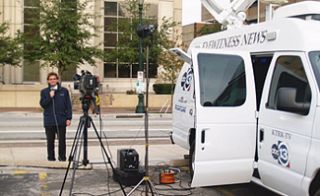 ALEXANDRIA, VA
The ABC owned and operated station group recently took a giant leap forward in SNG newsgathering. With a fleet of nearly 100 ENG and SNG trucks among its 16 O&O stations, ABC upgraded 16 of its satellite newsgathering vehicles with a new MPEG-4 transmission and remote control system. The result has many at ABC smiling.

"We now have 16 trucks that are basically fully automated, so that anyone can now drive and operate them," said Michael Huitt, director of new technologies at ABC NewsOne, the affiliate news service for ABC News. Huitt worked on the project with the O&O group.

Partnering with ND SatCom, Fujitsu and Sencore, ABC created a fleet of smaller, more agile trucks based on a European model first introduced by ND SatCom nearly a decade ago.

"Our first fully automated system was for Canal+ in France, which began operations in 1999," says Stefan Jucken, director of sales for ND SatCom in the Americas. "We can now automate trucks to a level where non-technical folks can operate them," he explained.

Huitt, a long-time SNG veteran for ABC is impressed with the new system's capabilities and simplicity. "Basically photographers are operating them just as they would a microwave truck," he said.

"In Europe we have gone to the extreme where a journalist drives the van, shoots and edits, while our system runs the truck," Jucken explains. "With an automated SNG truck you can either save money or do more with what you have."

While ABC has no plans to follow this European model, it has learned that the ability to have microwave truck flexibility, combined with the power of an SNG truck, is the wave of the future.

KTRK, the ABC O&O in Houston, tests its SNG truck.HOW THE AUTOMATION WORKS

German satellite communications company, ND SatCom describes its "Media Network Solution" as an integrated transmission and management system for bidirectional signal types. This system can control both ground and space resources through automation or manual control. Its solution also combines video or streaming data with phone and intercom communications.

Mike Huitt explains that after a truck is parked, "You basically fire up a laptop in the truck, hit one button and the antenna deploys, finds Galaxy 16, peaks itself and then joins an IP network in the sky."

This saves time from the traditional SNG routine, which needs to be performed by a skilled technician.

According to Jucken, the system provides fast and automated satellite access with the use of ND SatCom's SkyWAN network and TDMA carrier.

Huitt explained that once a truck is online, it checks in with the network traffic cop known as the Proxy Manager to see if the system has any orders pending. This is done via an interface to a satellite scheduling system that ABC has used for years.

The ND SatCom system takes the information gathered and creates an XML message that is sent to the truck along with all of the necessary parameters for the event; such as start and stop times, frequency, data rate, FEC and any other critical information.

"At the appropriate time the truck comes up on the bird," said Huitt. "No call is needed to the satellite provider and no one is actually needed inside the truck. The system automatically comes down off the bird as scheduled, and when the operator returns to the truck they just stow the dish via the laptop and they are off."

The automation requires an additional investment of around $70,000 per truck over a typical SNG deployment, and about $20,000 for the SkyWAN equipment at the controlling hub. A 1.5m dish is used on the truck and typically a 3.8m or larger dish is used at the hub location. There is an added safety benefit to using small dish SNG vehicles over traditional microwave vans, in that no mast is required, thereby minimizing encounters with lightning strikes and overhead power lines.

In addition to adding the automation feature to the trucks, ABC is also using MPEG-4 compression technologies to increase the efficiencies of its transmissions to allow more signals on a single transponder.

"In our first deployment we used a Fujitsu MPEG-4 encoder, a NewTek modulator and Sencore IRDs," said Huitt. He added that Fujitsu has since added a modulator, so future deployments won't require separate boxes.

Stations have been slow to embrace MPEG-4 for SNG use due to latency issues, but thanks to a partnership between Fujitsu and Sencore, the companies have reduced the latency, making MPEG-4 acceptable for SNG use.

"The latency is only 50 to 70 milliseconds more than our typical MPEG-2 trucks, so it is definitely usable for newsgathering purposes," Huitt said. Currently ABC is successfully testing its 720p HD feeds at 4:2:0 profile, and at only 7Mbps data rate using DVBS2 modulation with MPEG-4 encoding.

There's nothing like severe weather to test a new system, and ABC got that and more as two of its new SNG trucks were at KTRK in Houston when Hurricane Ike struck the Texas coastline in 2008. It was the first time the new system was tested in one of newsgathering's most difficult transmission environments, and the automated uplink power control proved to be instrumental in keeping the coverage on the air.

"The SkyWAN's uplink modem communicates with all of the receive modems in the systems' network," said Huitt. "So when it polled receive sites in L.A., Chicago and New York, it found that they were all seeing the signal 4dB low."

Huitt said that the system compensated by raising the uplink power. "The trucks have 400 W HPAs, which we normally run at about 20 W," he said, "but during the peak of the storm we were driving them to 270 W and they looked great."

Other than for a few rain fades within the immediate proximity of the storm's path, ABC was able to keep the signal up and running for the duration of the event. "We stayed on the air the whole time," said Huitt. With the successes experienced so far, Huitt sees ABC expanding its fleet with more new SNG trucks in the future.