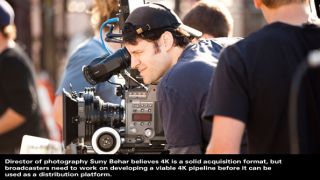 In December Advanced Systems Group (ASG) focused our annual workshop on 4K and large raster production workflows. 4K has become the new HD, and professionals at every level of the production process have begun to embrace the benefits of higher resolution video acquisition – and the challenges of the data-intense workflows required to make them functional.

Suny Behar, director of photography and instructor at UCLA’s Film, Television & Digital Media Department, agreed that 4K is a feasible acquisition format, but broadcasters must deliver a viable 4K pipeline before it can be used as a distribution platform. “In order to sell 4K as a consumer reality, broadcasters need a complete delivery pipeline,” he said. “When we hit the on-air button, we have to make sure there is an actual visual improvement with the 4K signal over the HD signal.”

If there is no significant visible improvement with 4K over current HD broadcasts, Behar said the broadcast industry risks a backlash similar to current consumer disinterest in 3D. Raster size is only a fraction of the story, as compression technologies will have to improve over current HD standards. With so much more picture information, service providers might have to make quality-over-quantity decisions regarding programming, even with improved compression technologies.

Audiences are becoming more sophisticated and have higher expectations, as technology improves, said Nathan Hackett, visual effects director for San Francisco-based Westernized Productions. “I think people are expecting the higher resolution, the cinema quality at home. They even expect commercials to be more cinematic,” he explained. “4K is here and it’s here to stay.”

It may also be coming soon to a television set near you. While the Federal Communications Commission (FCC) is yet to approve a 4K broadcast standard, the International Telecommunications Union (ITU) approved ITU-R BT.2020 in August 2012, a recommendation that created parameters for ultra-high definition television (UHDTV).

Despite the technological challenges, Behar remains confident of an eventual 4K broadcasting future. “We’re going to meet bandwidth requirements and camera specs well before 2020,” he predicted.

Meanwhile, there are only a handful of cameras that can deliver true 4K acquisition. According to Behar, RED has taken a leadership role in 4K production, with three models – RED ONE, EPIC, and SCARLET – built around the company’s 14 megapixel MYSTERIUM-X image sensor.

Sony will soon have four CineAlta 4K digital motion picture cameras, including the new PMW-F5 and PMW-F55, which are expected to be available in February. The company already offers the F65 4K camera, which can output 16-bit linear RAW that preserves up to 8K of resolution, as well as the NEX-FS700, which will be able to shoot 4K after an upcoming firmware upgrade.

There are other 4K cameras as well, though Behar does not include them as viable options for full-time episodic television work. JVC offers the GY-HMQ10, for example, but Behar said it does not provide Super 35mm depth of field. GoPro has the Hero3: Black Edition, but its 4K capabilities are limited to 12 fps. And the Phantom 65 from Vision research delivers 4K imagery, but it is a high-speed camera designed to capture brief scenes in slow motion. There are also a number of cameras that offer large raster acquisition but not 4K; the popular ARRI Alexa, for example, only delivers 2K resolution.

On set, Jordan Livingston, digital imaging technician (DIT) for his company, DIGILOID, in San Rafael, Calf., is responsible for initial color grading and data management. “When we’re capturing 4K, we’re generating an enormous volume of data,” he said. That data has to be verified to ensure that hard drives are being filled with good images, not bad files. Data also has to be backed up, because digital files are no longer captured on a physical media like tape (and the volatility of hard drives require safeguards). Finally, the footage must be transcoded for dailies and editorial, as well as archived, though these steps may or may not happen on set.

“That extra resolution and color depth really helps,” said Carey Burens, colorist and post producer for San Francisco-based Spy Post, a FotoKem Company, which provides post-production and VFX services. He recalled a recent project, the introduction to an episode of Sunday Night Football, which was shot using an ARRI Alexa. Producers wanted the extra resolution, clarity, and color information of large raster acquisition because of the introduction’s heavy use of chromakey and compositing.

Visual effects and other post-production enhancements are some of the driving forces for large raster acquisition, added Chris Martin, colorist and digital intermediate (DI) artist at Spy Post. “The more resolution the better,” he explained. “It means I’m going to get more detailed info to play with as a colorist.”

With such large files, Livingston said 4K requires a new approach to workflow, and he recommends working backward from delivery requirements to streamline the process where possible. For example, if the project requires visual effects, the VFX team may use 4K footage. That said, if the project will be delivered in HD, post production can work with lower resolution, transcoded HD files, so full resolution 4K files do not need to clog their NLE system and storage.

“There are so many different flavors of 4K workflow, no two companies do it alike,” Livingston said. “You can’t impose one workflow on every project – it’s just not possible. It’s all a matter of finding the right workflow, managing the different permutations from acquisition to delivery. If you don’t have a roadmap and a plan, it can be a big challenge.”