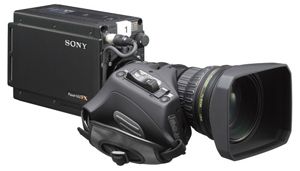 LAS VEGAS
Sony will come to the 2010 NAB exhibition floor with an emphasis on 3D production tools and video production workflow.

"Our cameras have been used for most of the commercially successful 3D projects, including the record-setting blockbuster 'Avatar,'" said Alec Shapiro, senior vice president for sales and marketing, Sony Electronics Broadcast and Production Systems Division.

Sony’s HDC-P1 full HD compact multi-purpose camera. With studios planning to produce a number of new motion pictures in 3D and networks including ESPN and the Discovery Channel set to launch 3D cable channels in the coming year, Sony is stepping forward with new products aimed at the 3D production marketplace.

One of these is Sony's new MPE-200 3D Processor, which provides a variety of digital adjustments to the stereo imaging HD cameras, allowing a similar control experience to mechanical servos. The MPE-200 digitally simulates several of the adjustments that are currently performed mechanically on higher end rigs. The 3D Processor provides stereographic engineers a means to manage camera and rig parameters in order to deliver high-quality 3D images. MPE-controlled systems can also augment higher end rigs in complicated 3D live productions.

Also purpose-designed for 3D production is the company's new HDC-P1 full HD compact multi-purpose camera, which combines 2/3-inch CCD tech-nology and a two-disc filter servo in a small and lightweight design. "It's the first Sony camera to be designed from the ground up with 3D in mind," said Rob Willox, director of 3D Business Development for Sony.

Sony's 3D technology will be fully in view at NAB in a 53-foot double Expando 3D-enabled HD video production truck, built by All Mobile Video (AMV). In addi-tion to Sony cameras and MPE 200 3D Processors, it features Sony's MVS-8000G multiformat switcher, capable of switching the two-camera inputs necessary for a 3D image as a single source, SRW recording decks, and Sony monitoring.

Sony will also showcase an as yet-un-named resolution-independent multiformat ingest and transcoder platform, which can be configured to meet a number of challenges faced by broadcasters and post production facilities. The systems can simultaneously ingest content from up to four high-definition VTRs (four sampling 4:2:2, or two sampling 4:4:4 signals) in parallel. Depending on the target workflow, the systems are designed to give users the option of delivering content directly to their shared storage using many of today's popular file formats including MXF, DPX, J2K and Avid DNxHD.

Also new is the MVS-6000 multiformat switcher with ELC Automation, expandable to up to 49 inputs and available in configurations up to 2.5ME. Sony's "System on a Chip" image processor provides for embedding keyer and DME processing within the switcher's CPU, and enables multiformat switching, multiple key chan-nels, transitions and DME functions to be carried out on one chip, which enables a compact frame, high-speed effect processing and low power consumption in an affordable package.

"Acquisition is one of the things we do best, and always a big attraction at this show," said Shapiro, "As always, we will have an array of new cameras and camcorders on display."

Sony will also feature the HSC-300 and HXC-100 cameras, which both feature a 2/3-inch Power HAD FX CCD with 2.2 million pixels, and are switchable between 1080i and 720p 50/60 Hz, with downconverted 525i and 625 SD modes available from the camera head and CCU. Both new cameras use Sony's digital triax trans-mission technology to allow customers to use their facility's existing triax cable infrastructures for a seamless and cost-effective transition to digital transmission and ultimately to HD.

Sony also will showcase its new HXR-NX5U which it launched last fall. Part of the company's new NXCAM line, the HXR-NX5U is designed to bring the benefits of seamless and easy-to-use solid-state production capabilities to professionals and "prosumers and is Sony's first professional camcorder to implement the AVCHD format. It records AVCHD up to 24Mbps on Flash media to deliver 1920x1080 HD images with both interlace and progressive modes along with native 1080/24p, 720/60p and MPEG-2 SD recording. It sports the same 20x optical zoom G lens used in Sony's HVR-Z5U professional camcorder.

The PMW-EX1R features DVCAM recording capability to its predecessor PMW-EX1, as well as numerous enhancements, including an HDMI output, a higher-resolution viewfinder, cache recording, and one-push auto iris.