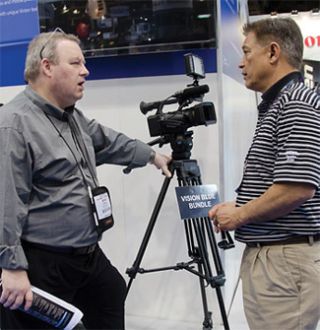 Camera Support vendors brought out new products in reaction to the video-enabled DSLR revolution sweeping the industry. Where, in the past, these companies got bragging rights by developing systems that would support larger payloads, the target now seems to be who can provide smooth panning and tilting to nearly weightless packages. And though the ultimate fate of 3D for TV production is still in doubt, no one wants to be left behind in case 3D does catch fire.

OConnor launched its 2065 fluid head with capacity for such digital cameras as the RED One, SONY F-35, and ARRI Alexa.

Tiffen highlighted the Davis & Sanford line of Provista tripods, including the Provista 100 and Provista 6510, designed for videographers who need a heavy-duty tripod for a variety of field, studio, educational, and industrial applications. Vinten premiered its Vision Blue pan/tilt head for lightweight camcorders and DSLRs.

Shotoku introduced the TP200, a new two-stage pneumatic pedestal, and also the SX300 head for payloads of up to 83 pounds.

CamMate Systems displayed a redesigned model of its retractable crane with extension to 27 feet.

Gus Harilaou (R) demonstrates the Miller Compass 25 fluid head with accessory mount for Ulric Flood from Videoforce in Sweden. Photo by Dawley/KovacsCineVentions debuted its ZoomCrane, which extends and retracts via a scissoring action, and can be fully erected in less than a minute and folded up to fit a luggage-sized carrying case.

Polecam unveiled its Polecam Starter Pack, a rig designed for use with latest-generation compact camcorders and D-SLR heads.

TechnoDolly demonstrated its repeatable movement dolly and crane system that supports payload of more than 77 pounds.

Cinevate presented its Atlas 10 single mount slider system for vertical, angled or horizontal mounting, and available with 26- or 35-inch tracks.

Innovision Optics premiered its Kamtrax vertical and horizontal camera slider for counterbalanced sliding at any angle from vertical to horizontal.

Matthews Studio Equipment unveiled its DC Slider, a camera support slider that can be configured as a mini-jib and vertical tower.

ARRI added new adapter plates for the new PL mount camcorders for use with camera and lens tools from ARRI and other makers.

edelkrone showed its DSLR/small camcorder rig that’s supported from both shoulders of the operator. It features modular construction for use with large and small cameras.

Heidi Wheeler shows off the ProPrompter HD i Pro2 iPad Prompter and Smartgrip Mobile 4. Photo by Dawley/KovacsVariZoom introduced its Aviator MX-HD professional stabilizer with a new sled design with improved performance and ergonomics.

3ality Digital introduced the TS-5 Light 3D rig, a streamlined version of its TS-5 mini beamsplitter rig for steadicam and for handheld use. Even smaller is its new Handheld Wonder Module, for use with even smaller, lighter cameras.

Element Technica launched Atom, which can be switched from side-by-side to beamsplitter mode and uses the same controls as other E.T. 3D rigs.

P+S Technik's Evolution Freestyle rig has heavier duty plates and adjusters for use with cameras like ARRI Alexa and RED.

Azzurro showcased its Azzurrocam for remote use by broadcasters, news organizations, sports teams and others.

Cambotics premiered its remotely controlled Legislative System that can control hundreds of cameras.

Sachtler representative, Keith Takenaka proudly shows off the Cine DSLR Head on the left and the FSB 8 System on the right. Photo by Dawley/KovacsAutoscript introduced a pair of peripherals to its studio teleprompter line, the CountPlus, with a timecode and countdown generator, and the CuePlus, a color-selectable camera tally light.

Mirror Image Teleprompters introduced its iPad series of prompters. They allow use of an iPad as the monitor for their prompter assembly.

Smart TP unveiled a small prompter designed to mount to any PDA-sized screen.

Pelican debuted new cases for iPads and other tablets. The 1065, 1070 and 1075 provide a range of padding and cord storage.

Petrol premiered its new DigiSuite DSLR camera case with a central compartment contoured to accommodate up to two DSLR cameras.

PortaBrace unveiled its Large Backpack, a lightweight carrier for large video camcorders and other equipment.

Panther demonstrated its VacuRigg system for mounting cameras, lights or other accessories on any smooth surface via a suction pad.