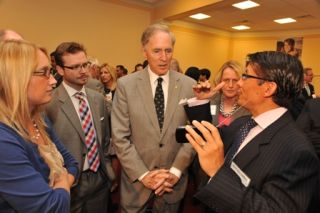 WASHINGTON—The formality and almost celebratory tone of the Open Mobile Video Coalition’s press conference on Capitol Hill Thursday somewhat belied what had already occurred in the budding mobile DTV market. The years of innovation and technical developments. The partnerships. The political wrangling.

Eric Moreno (R), senior vice president of corporate development with Fox Networks, demonstrates Mobile DTV to Rep. Cliff Stearns of Florida. The resultant gathering after years of work included representation from many key players in the industry at the official commercial launch of yet another new day in broadcasting: The start of live, local Mobile DTV services during the next few months into 50 markets by 130 TV stations. Today, approximately 90 U.S. stations are transmitting Mobile DTV signals, according to recent Harris Corp. figures.

The speakers at the event, included emcee Derek McGinty of WUSA-TV in Washington, several politicians and most notably Eric Moreno, senior vice president of corporate development with Fox Networks. He cited the main developments in the industry, such as Mobile DTV’s acceptance in various markets around the country.

Among Moreno’s points of discussion was the advent of the new Samsung Galaxy S Lightway 4G handset, the first smartphone to come with a preloaded Dyle TV app. It is available in 12 markets where TV stations are now transmitting Dyle-branded signals, that costs north of $400; as well as what are known as “dongles,” which the industry will rely on to further boost the use of the technology.

The small plug-in antennas are manufactured by two companies, Belkin and Elgato, and will retail for about $100. Use of the devices, which will hit the market for the holiday shopping season, means that the user will not have to use data from sometimes limited subscriber plans to watch Mobile DTV content.

On the station side, “It costs approximately $125,000 to set up to transmit their DTV signals to mobile devices,” Moreno said. And while there are observers in the industry who wonder just how soon significant penetration on the user end will occur, he made a quick point.

“There are 64 million iPhones and iPads in use in the U.S.,” Moreno said. “If you reach 1 percent penetration, you’ve got yourself a business.”

Also important to this latest phase of the DTV evolution is mobile digital video’s use in emergencies. “If your power is out during a storm or a natural disaster,” said fellow speaker Vincent Sadusky, president and CEO of Lin Media of Providence, R.I., “you can charge your phone in your car.”

Among the day’s attendees was Lynn Claudy, senior vice president of technology for NAB, who thinks that, as is the case with any new technology, there will be an acceptance curve by the public.

“This is the culmination of a number of years of work from disparate sectors of the television industry,” said Claudy said. “That marks the start of a new broadcast service. Now we have to convince the entirety of the industry to use it and the market to adopt it.”

The next question, he said, isn't so much if mobile DTV will take hold, but how fast.

“Technology advances so much faster today,” Claudy said, recalling how long it took HDTV technology to really take hold in the consumer market. “Remember, the TV set used to be the most beloved appliance in the house and it lasted for decades. Today, it’s still a beloved service, but the devices used to watch content are changing, as well as the needs and desires of the public.”

“The great thing about today in the electronics and broadcasts industries,” said Sadusky, “is that the question has always been, ‘when?’ And now we know that the answer is sometime in the fourth quarter.”