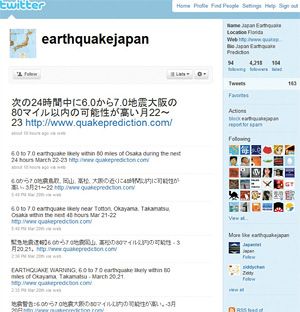 OTTAWA—It seems counter-intuitive: A 9.0 magnitude earthquake followed by an unprecedented tsunami devastates Japan— and Twitter survives. In fact, millions of "tweets" went to and from Japan following the disaster.

According to NTT spokesperson Yuichi Inukai, there are over 14 million Twitter subscribers in Japan. "That means that well over 10 percent of entire Japanese population use it."

Twitter provides VT news departments with an international newsgathering tool that allows fast access to on-the-scene witnesses at no cost. So how does Twitter—an Internet-dependent data application—keep running when conventional telephone and e-mail traffic go down? The answer—which also explains why Twitter is so useful to TV news departments—is found in a coincidental collision between technology, the dotcom bubble and the usefulness of short, concise messages.

THE IMPORTANCE OF 'MESH' ARCHITECTURE

By their very nature, telecom networks are robust. This is because they are built using a "mesh" architecture, where every point has multiple paths to the other points on the network.

"A mesh network is incredibly difficult to knock out," says Dave Karow, senior product manager of Internet Testing and Measurement with Keynote Systems, a mobile/Internet monitoring and testing firm based in San Mateo, Calif. "If one path is destroyed, a mesh network can automatically reroute the signal to its destinations through a number of alternative routes."

Japan's sophisticated telecom network, with its many mesh pathways, provided a highly redundant medium for Twitter subscribers and the TV news people who contacted them. This said, "The horrible earthquakes and following tsunamis destroyed most wired Internet access in the devastated areas," says NTT's Inukai. However, mobile networks did not suffer the same degree of destruction. Add the fact that "95 percent of Twitter users in Japan use it via mobile phones," and one can see why Twitter was a natural form of emergency communication.

"Ironically, Hong Kong Internet users suffered more from the quake/tsunami than Japanese users did," Karow says. "This is because the relatively few Hong Kong/North America links travel through Japan, and these links were disrupted by the disaster."

Besides the technological factors that support Twitter, the very nature of the medium makes it a natural for post-disaster communications. "I would say that 'people use social media to survive natural disasters,'" Inukai tells TV Technology. "Twitter is the most convenient and efficient, least time-consuming way for the refugees to pass information on to people outside the devastated areas."

Clearly, Twitter is the beneficiary of numerous coincidental technological trends. Its subscribers aren't the only beneficiaries: Twitter provides TV news departments with an international newsgathering tool that allows fast access to on-the-scene witnesses at no cost. Moreover, given the popularity of Facebook and other social media, Twitter can be an effective initial method to find contacts who can then provide video and audio over these higher bandwidth sites.

Perhaps the best part is that these Twitter sources alert the world of their existence through their tweets. As a result, smart news producers can shorten the process of finding contacts by simply looking through relevant Twitter feeds.

Finally, the content provided by Twitterers can be used to offset the doom-and-gloom of conventional disaster coverage. The Japan crisis is a good example of this last point:

"While all TV stations tended to show sensational images like tsunamis and nuclear power plant explosions and to promote the crisis mentality of audience, Tweets at that time were more calm, down-to-earth and encouraging," Yuichi Inukai observes. "Of course, there were some false rumors and panicking tweets at the time, but soon most of them faded, and corrected tweets got prevalent. I believe that Twitter worked as a healthy alternative to the conventional media like TVs and newspapers."