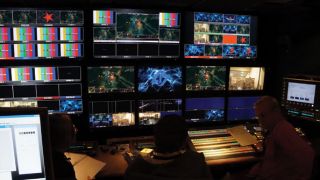 The intensity of the gaming universe continues to reach new heights, with astonishing technical advances every year. The audiences who witnessed the early September events at Benaroya Hall in Seattle saw something truly special, as the broadcast and gaming worlds blended for a truly unique event.

The venerable 2500-seat performance hall in the downtown area was host to “The International Dota 2 Championships,” a three-day gaming event that brought 16 teams together to compete for the 2012 Championship Title — and a $1 million prize. Dota 2 is the follow-up to “Defense of the Ancients,” a multiplayer online battle arena video game with global popularity.

Together, the various arms married a broadcast-quality sports production model to this international gaming event — while juggling the creative complexities associated with delivering both colorful, in-house HD projections and demanding live, multilingual broadcast streams for worldwide audiences. The days were also long, with live streams rolling from 8:30 a.m. to 1 a.m. for three straight days.

TNDV drove its 40ft expanding side truck, Aspiration, to Seattle for the production. Aspiration is built to handle large entertainment events, with a complete HD (and 3D-ready) infrastructure ready-made for everything from live sports to major concerts and awards shows. The truck includes a large Harris Platinum routing solution (with integrated multiviewers), Ross Vision production switcher, Soundcraft Vi4 audio console and a bank of AJA Ki Pro video recorders among other technology.

The presence of several commentator desks made the sports production model especially vital. The configuration replicated a sports network environment, with several host positions at each desk. The unusual aspect was play-by-play and color commentary in different languages — English, Chinese and Russian — which set the stage for a complex and challenging audio configuration.

TNDV first evaluated the venue to strategize the most effective acquisition plan for the live shoots. Multiple cameras were required: six Hitachi HD5000 cameras for fixed positions and handheld use; two Panasonic AW-HE120 robotic cameras, positioned and balanced on pods; and two roving Sony EX3 cameras to capture backstage action. Onstage, teams of five competed against each other within custom-built player pods, each outfitted with Sony HXR-MC1 POV cameras for close-ups of player reaction.

Sony PVM-1741 OLED monitors allowed the production team to color-match the different camera models, providing a consistent look across all in-house and external broadcast signals. The Sony Ex3 cameras were specifically chosen for both outstanding image quality and the simplicity of color-matching to the Hitachi cameras. ChromaDuMonde color calibration charts from DSC Labs were employed to build custom theme files for every camera.

The various camera models and positions captured a lively and intense atmosphere for the in-house projection, while also giving external audiences more control. Viewers could choose which cameras they wanted to watch, allowing them to focus on the team or player they wanted, follow certain analysts, or check out the backstage action.

Backstage at the championships, a row of busy technicians monitors the multiple servers processing the various vantage points of the live games in play. Many of these views were available as real-time sources on the Ross Vision switchers.

Viewers could also opt for a full-screen version of the player computers, enabling them to view the action as if they were playing the game. To accompany the video selections, viewers could choose from three audio streams covering the aforementioned languages.

Behind the scenes, Graystone Media operators followed a live Twitter feed from viewers around the world, making adjustments to sound and video based on immediate feedback. This integration of social media into the live monitoring process only served to enhance the viewer experience.

TNDV’s infrastructure typically produces 1080i HD broadcasts for televised events. The team quickly discovered that 1080i nearly equates with standard definition in the gaming world. It was clear that every pixel and graphic on that screen would be critiqued — all the more intimidating as that judgment would come from gaming experts who create pixels for a living.

Modern gaming offers very high resolutions, with an amazing amount of on-screen detail. We added several Barco ImagePRO-3G signal processors to scale and transcode video for 1080p-quality output. This translated the game’s finer visual details well, with in-house attendees and viewers able to clearly see the flares, sparkles and flashes that take place when an on-screen character casts a spell.

Those seated in the venue were, therefore, treated to exceptional projections, with three distinct screens. Team A and Team B were seen at left and right, with a center screen switch of the various cameras and real-time computer-screen shots.

Graphics accompanying the live video were carefully balanced for required variances for live AV projection (big and robust) and web streaming (small yet legible). Graphics, however, were just one component where careful considerations were made to ensure a unique experience for both the venue and the broadcast.

The multitude of video and audio signals crossing the venue was a lesson in intricacy. TNDV came treacherously close to fully populating the router and associated I/O panel as the connections mounted.

This was chiefly due to the fact that the team was, in actuality, producing three shows. The main show was the on-stage battle. The lobby, with the analyst desks and live game play breakdown, constituted a second show. Meanwhile, the backstage area represented a third show, complete with live post-game player interviews and strategic discussions.

The juggling act required a complex web of video and audio distribution, with signals racing between Aspiration and the three production locations. Meanwhile, front of house engineers tapped into the truck routing system for projection, while Trifilm and Graystone representatives traded signals with TNDV staff from live edit stations.

The recorders, in tandem with Final Cut Pro, supported ProRes 4:2:2 from capture to playback, offering an efficient HD workflow from start to finish. Blackmagic Design converters on the truck also figured into the editing workflow, connecting to Mac laptops via Thunderbolt. This allowed TNDV engineers to immediately play back recorded clips during breaks in the action.

The Harris Platinum router was critical in passing these signals between each location. Aspiration’s technical director used LCD routing control panels to initiate feeds to and from the truck with ease, accuracy and reliability. A Trifilm editor, for example, would instantly receive a specific camera feed on request, communicating with a TNDV technician over the RTS Intercom system. The router panels also enabled multiviewer control, multi-route salvos and GPI event triggers.

Trifilm editors were able to instantly receive a specific camera feed on request, fed over a Harris Platinum router, while communicating with TNDV technicians over the RTS Intercom system.

Harris also provided an edge server as part of the router package, configured over single, truck-connected Wi-Fi drop. The server supported custom-creation of virtual router panels in HTTP-accessible web interfaces. This gave multiple operators their own router interfaces — ideal for the many editors asking for constant feed changes. It also saved an enormous amount of time and money, eliminating the need to rent physical panels and run control lines (and power) across the venue.

The router’s integrated Harris HView SX Hybrid multiviewers were integral, allowing engineers to set one of the PiPs to follow the output of a router destination without needing to re-enter the signal into the router as a source.

Traditionally, monitoring resources are wasted when using non-integrated configurations if “confidence” of what the router outputs to a certain destination is desired. The integrated Platinum and HView configuration shares all sources and destinations, eliminating approximately one dozen router I/Os and distribution amplifiers. This is extremely useful when producing such a massive show on a 40ft production truck.

The multiviewers automatically displayed the name and type of signal, with embedded audio meters for each routed source. This gave the entire production team the confidence to stay on top of all feeds at the very end of the production chain.

The routing system also accommodated five in-house feeds for house projections and analyst stage monitors, as well as external multilingual audio feeds for the web streams. Three separate closed caption encoders were also keyed in live for interview translations to and from Russian and Chinese.

Audio was perhaps the greatest challenge, from the sports desk commentary to the multilingual web streams. All of these mixes were switched at the truck and routed with their respective video feeds to their destinations.

The RTS Intercom system supports a total of 14 IFB feeds, each with a dedicated mix-minus feed, to the English, Chinese and Russian commentary desk. All commentators used Sennheiser headsets and talent boxes from Studio Technologies complete with microphones and talkback buttons.

TNDV ran four DT12 audio cable runs between the truck and the commentator desks, spanning from 100ft to 750ft. Analysts would typically go on the air for 20 to 30 minutes between brackets as the next teams prepared to compete. The English broadcast comprised four analysts in the lobby, with two additional analysts offering color commentary from the other side of the venue.

One of the Russian commentators, unable to gain access to the United States, remained home. A T1 phone line connection between the truck and the commentator’s home allowed him to contribute to the live discussion. TNDV delivered the main program audio mix over this line, which the venue provided.

Back on the truck, audio engineers used Aspiration’s Soundcraft Vi4 console to pair auxiliary feeds and deliver the separate multi-lingual mixes as separate stereo auxiliary feeds. The Soundcraft design allows engineers to hear auxiliary solo mixes in stereo to ensure that the mixes arrive at their destination sounding great — an ideal confidence monitoring tool for live production. Most sends and some receives were distributed as embedded audio via the Platinum router.

Overall, this layered production was a unique marriage of HD production and live streaming with broadcast integrity — and an innovative presentation of a gaming tournament within a traditional sports coverage model. The combined efforts of Valve, Trifilm, Graystone Media and TNDV turned a challenging and unusual production situation into an example from which we and others can learn and grow.

—Nic Dugger is president of TNDV. Josh Echo-Hawk, vice president of business development for Graystone Media, contributed to this story.