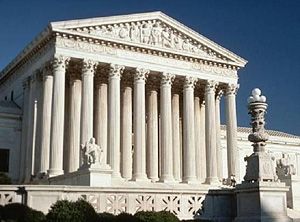 The Radio Television Digital News Association (RTDNA) and C-SPAN—long time proponents of opening up the Supreme Court to public broadcasts—sent letters to Chief Justice John Roberts this week, asking that the court televise the health care debate, scheduled for next March. Roberts opposes the use of cameras in the court and as recently as two years ago, a bill was introduced in the Senate to allow them but died after the Judiciary Committee approved it.

The two organizations cited the high public interest in the proceeding as a reason to drop the camera ban at least temporarily. “The Court’s decision to schedule at least five-and-a-half hours of argument indicates the significance of this case,” C-SPAN President Brian Lamb wrote. “We ask that the Court further reflect this particular case’s significance by supplementing your ‘end of the week audiocast’ policy with live TV coverage. “ Lamb added that the argument “begs for camera coverage—interested citizens would be understandably challenged to adequately follow audio-only coverage of an event of this length with all the justices and various counsel participating.”

RTDNA likewise cited the significance of the proceedings, noting that the final decision on the constitutionality of certain aspects of the health care law will “shape the 2012 presidential campaign,” and warned about political ramifications.

“Public exposure of the processes of government is virtually always in the public’s best interest,” said Kevin Benz, RTDNA Chairman. “In an era of perceived partisanship, our nation’s citizenship may view the justices’ votes as cast according to their personal and political preferences rather than as objective interpretations of the law. Permitting broadcast of Supreme Court appeals, on the other hand, will further the interest of justice, enhance public understanding of the judicial system, and maintain a high level of public confidence in the judiciary and in our democratic processes.”

RTDNA requested that if the court continues its ban on cameras, that it at least allow real-time audio broadcasts of the proceedings, something the court hasn’t done since the 2000 Bush v. Gore case.