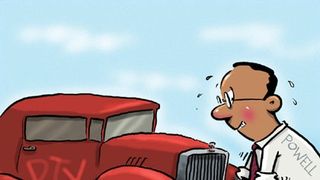 It looks like FCC Chairman Michael Powell is finally putting some air back in the nation's DTV system. He's managed to not only speak openly in support of the value of DTV, but also get his commission to approve steps to help broadcasters get their DTV stations on the air. What a novel idea!

The commission's Nov. 8 action made several significant changes to the DTV rules. These are a welcome change from Kennard's anti-broadcaster approach.

Most important is the change that allows stations to build less than maximum broadcast facilities. Stations no longer need build a transmission system that replicates their entire grade B analog service area before 2005 or lose interference protection for the unserved area. Now, stations can build a lower-power facility and serve their community of license while still receiving interference protection to the fully allocated service area. This will allow stations to initiate DTV broadcasts with less expensive systems and build out to full power as the DTV transition continues.

Stations that have already been granted a construction permit for full-power operation can modify it and build only what's necessary to cover the city of license.

Stations with core DTV channel assignments also have more time to decide which channel they want to use as their post-transition DTV channel. Stations can also operate their DTV systems less than full time.

While the commission refused to issue a blanket extension of the May 2002 DTV construction deadline, it agreed to consider financial hardships on an individual basis.

The serious unanswered question is what a bunch of low-power TV stations will do to the predicted receive situation. Previously, DTV coverage predictions were based on full-power operation. With many, perhaps most, stations operating with a few kilowatts of RF, what will that mean to the 85 percent rule? Will the 85 percent coverage areas be calculated on actual coverage at the low power levels? Will sufficient viewers even be able to receive these low-power transmissions? With the hassle many have encountered in receiving high-power stations, what happens when the level is 20dB lower? Even our DTV receive guru, Pete Putman, and his custom antennas may have a problem trying to pick up a 1 kW transmitter at 20 miles.

Clearly, the FCC must take the next step and mandate DTV cable carriage. A recent report by the Merrill Wise Group (MWG) shows that cable has plenty of spectrum to provide digital carriage. However, it's going to take FCC action to get cable to devote a single megahertz to free DTV carriage.