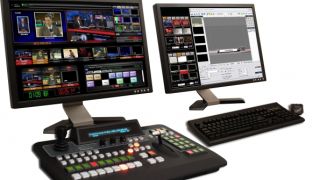 The record-breaking interview of historian and political enthusiast Hans Olav Lahlum by Mads A. Andersen began at 11 a.m. on May 22 and ended 30 hours, 1 minute, and 44 seconds later.

According to Pål Hansen, VGTV’s chief technology officer, two cameras provided static shots throughout the production, including a two-shot of Lahlum and Anderson. Two camera operators provided close-ups of the discussion, while another operator handled a crane-mounted camera that provided dynamic moving shots throughout the interview.

Produced at VGTV’s media house in the center of Oslo, the interview was conducted in a street-level studio with large windows, so pedestrians could look in and watch. A studio audience was invited as well. Hansen said VGTV attempted to break the record to gain publicity for the network.

VGTV has been using its Granite 1000 since 2011, and the station added a Broadcast Pix Mica system last year.

“For the interview we didn’t use clips, of course. That was all live,” Hansen said. “We used CG and the animation player for lower-thirds.”

During the production, there was only one major technical issue. Power in the studio shut down once due to a rain leak that short-circuited a power connection on the wall. As a result, the production lost light for a few minutes and the backup mics had to be used. Otherwise, the show went smoothly.