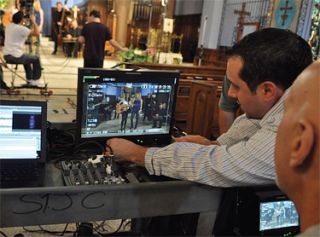 ALEXANDRIA, VA.—In the democratization of television, the quickly falling cost and rapidly improving quality of cameras probably ranks as the #1 reason why there is more video from more sources today than at any other time. Other revolutionary equipment and process changes, including recording technology and (of course), the Internet, played a huge role in increasing the number of voices who have access to both equipment and an audience.

David Venturini (adjusting monitor) checks to be sure he’s getting the right image on a JVC DTV17G1Z 17-inch monitor during a music video for Dianna and Beth Cristaldi. An important supporting player in this revolution is the video monitor. As cathode ray tubes gave way to LCD (and now LED) displays, monitors did all the right things to stay relevant in a rapidly changing production environment: They got lighter, thinner, less expensive, more rugged and more production-friendly overall.

"Having the right monitor is invaluable to the success of a shoot," said David Venturini, director, cinematographer and owner of Moving Pictures LLC. "It makes you confident as the director, producer or shooter knowing that exactly what you see in the monitor is what you get."

Ten years ago, LCD monitors shouldered aside CRT displays for production, particularly for field shooting. CRTs were heavy, bulky and finicky, sometimes requiring tedious registration adjustments to get the pictures right. However, CRTs brought some things to the party that hadn't yet been replaced by LCD monitors: deep black levels and smooth display of multiple resolutions.

Some companies that made CRT monitors are now gone, but others were able to make the transition to new technologies. One of those is Sony, which has a range of field monitors from low- to high-end. A recent addition to the company's monitor line is one that uses organic light-emitting diode (OLED) technology to recapture some of the remaining benefits of CRT displays.

The Sony PVM740 is a 7.4-inch field OLED monitor that shows the range of contrast captured by a camera. Sony also showed a 25-inch studio OLED monitor at the 2011 NAB Show, an indication that the technology is gaining traction.

Another way that field monitors today are making life easier for videographers is by building waveform monitors into a video display. Nothing replaces a waveform display to get the video levels right, and it saves time, space and power to have that function built into the video monitor.

One example is the Panasonic BT-LH80W, a 7.9-inch LCD monitor that can be either rackmounted or used as a field viewfinder. The BT-LH80W not only has a built-in waveform display, it has focus-assist technology that takes away some of the focus guesswork.

Another example is the new 3RU Plura PBM-207-3G, a 7-inch LCD field monitor with dual 3Gbps input display. It features an advanced waveform/vectorscope and multiple monitors can be controlled by a centralized system which can be used to connect different-size monitors in any combination.

David Venturini president of Moving Pictures, an Ardsley, N.Y.-based production firm uses JVC DTV17G1Z (17-inch) and the DTV9L3DY (nine-inch) displays. He appreciates the monitors' clarity and color reproduction, and mentioned several other features as being particularly useful for field shoots.

"Features that stand out to me [include] the 1:1 pixel mapping that allows me to see pixel-for-pixel the quality of the image without any distortion on the monitor," Venturini said. "The focus button is extremely functional because it is able to increase the peaking and the brightness of the image helping you to focus on the fly."

Shooting outside has become increasingly important, which was a concern for Venturini when he worked on a music video for Dianna and Beth Cristaldi.

"At one point during the music video, we had to shoot in a highly sunlit area and we did not have much cover," Venturini said. "Fortunately, the monitor is able to maintain its quality even in the bright sun and did not need to have a hood to see focus and contrast."

One example of how monitors have increased in portability and decreased in weight can be seen in the Marshall V-LCD70XHB-3GSDI. A seven-inch high-brightness field monitor, the V-LCD70XHB-3GSDI has a standard 1/4-inch screw mount on all four sides, making it easy to attach to production equipment—a feature unthinkable in a CRT monitor. The cast metal front panel and high brightness make the monitor a good choice for outdoor shoots.

The LEM-150 from TVLogic is a 15-inch OLED monitor for studio or field use. The OLED's ability to produce deep blacks is apparent in the LEM-150's contrast specification of 100,000:1. Although you wouldn't want a 15-inch monitor attached to your Steadicam rig, the LEM-150 works well as a tabletop or rackmount monitor.

Location video shoots might encounter multiformat video sources, which is no problem for the Ikegami HLM-904WR nine-inch field/truck monitor. The HLM-904WR also has waveform/vector display capability, as well as the ability to display timecode and listen to embedded audio. The monitor will work with an SD/HD format from 24 to 60 fps and it has an available dual-rackmount frame.

When you go on location, it's hard to say exactly what conditions you'll find. However, when it comes to monitors, most shooters have some idea of what's needed in the field.

"The most important quality for a field monitor in general is color accuracy," Venturini said. "As a director, you never want to bring back footage that takes hours and a lot of money to color correct in post."

And that bottom line points directly at the other bottom line: The right field monitor makes the shoot go faster and saves time during post production.

The big revolution in monitoring occurred 10 years ago when LCD displays became cost-effective compared to CRT monitors. Although LCD displays aren't perfect, their benefits are so significant that it was worth it to replace CRT displays. OLED displays are now starting to do the same to LCDs.