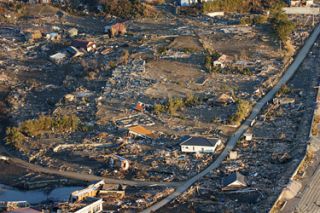 TOKYO—The March 2011 earthquake, tsunami and nuclear disaster that befell Japan dominated TV news worldwide. For U.S. networks and news channels, covering the event was a titanic challenge—and one that allowed them to flex their journalistic muscles.

Aerial of northern Honshu, Japan TV Technology contacted all the major networks—including ABC, CBS, CNN, Fox News and NBC, as well as Associated Press Television News—to find out how they coped with this unprecedented disaster story. Not all were able to respond, but those that did provided a snapshot of TV newsgathering under extreme pressure.

Associated Press Tokyo Chief of Bureau Malcolm Foster was at his desk when Japanese TV flashed an ominous warning: A "huge" earthquake was about to hit Japan, according to AP Senior Managing Editor Mike Oreskes. "About 10 seconds later, as the seventh-floor bureau started shaking violently, Asia Desk supervisor Chris Blake was hitting the button on an APNewsAlert reporting that a powerful earthquake was shaking buildings in Tokyo," Oreskes said.

While the quake rolled on, APTN senior producer Miles Edelsten grabbed a video camera and captured people pouring out of nearby buildings onto the streets. Meanwhile, photographer Itsuo Inouye snapped a photo of reporters Mari Yamaguchi and Jay Alabaster under their desks in the textbook earthquake position. This image was widely seen around the world.

"Tokyo Chief of Bureau Malcolm Foster filed and provided a running commentary to the desk via AP Communicator, through dozens of powerful aftershocks," Oreskes said. "At one point he thought the ceiling was going to fall and contemplated evacuating the bureau."

The APTN bureau in Bangkok was watching a live feed from NHK, which had only been installed two days earlier. "APTN Tokyo Assistant Producer Kaori Zhitomir was reading aloud the Japanese characters off the screen warning of a tsunami of up to 10 meters, which prompted Asia Desk supervisor Chris Blake to file another alert, Orekes said. "Asia Desk staffers watched agape as the TV images showed the tsunami rushing in. Suddenly, houses, cars and even ships were being tossed about like toys."

From that moment on, AP journalists were brought in from around the Pacific Rim to cover the story. They "fanned out into the decimated countryside, facing numerous logistical challenges to reach some of the hardest-hit areas," Orestes says. "The first team drove on back roads through the night to reach Sendai, the city closest to the quake's epicenter, to find a scene of utter devastation. Other teams pushed deeper into the affected areas to reach some of the hardest-hit towns before other foreign journalists."

"Like everyone else, we first heard about the Japan quake just after it occurred," said David Verdi, NBC's vice president of Worldwide News Gathering. "We quickly decided that this story was big and significant. And like everyone else, we had to pull in staff from around the globe and get them to Japan. So it became a logistical race for us to get people in country fast."

It didn't take long for NBC News to launch wall-to-wall coverage on its sister cable news channel MSNBC. This, plus its regular newscasts on NBC, kept viewers informed as the facts dribbled in. "We were fortunate to have NBC News Tokyo producer Arata Yamamoto in place," Verdi says. "Right after the earthquake, we went live to him by phone on MSNBC. We subsequently brought in Lester Holt from Barcelona, Ann Curry, and NBC News' Chief Science and Health Correspondent Robert Bazell from New York."

NBC News' crews fanned out across Japan equipped with video equipment and BGAN portable satellite transmitters. "The BGANs allowed us to broadcast from the quake and tsunami zones without having to worry about local resources," Verdi says. "Eventually we brought in two satellite earth stations as well."

Associated Press Tokyo News Editor Eric Talmadge, (L) gets a radiation check, March 15, in Fukushima prefecture, four days after the massive earthquake and tsunami struck Japan's northeast coast. Photo by AP Photo/Wally Santana "This was an incredibly unique story," he adds. "What began as an earthquake story became a tsunami story, and then an ongoing nuclear drama as the Japanese tried to prevent a meltdown. What made it especially difficult, besides the devastation of the landscape, was the limited amount of information we had to work with from TEPCO."

To protect its staff, NBC News brought a CBRN nuclear expert into its Tokyo bureau to test employees and monitor their health. It also kept staff a minimum of 50 miles away from the damaged reactor site, and made covering this story entirely voluntary: "Anyone who wanted to could walk away without a second's challenge," says Verdi.

Like NBC, "CNN has a bureau in Tokyo, so we've been reporting the earthquake since the moment it happened," says CNN Spokesperson Bridget Leininger. The news network has about 50 staff in Japan. "We have bureaus nearby in Hong Kong and Beijing, and some staff from those two bureaus flew in quickly to Japan to help our Tokyo bureau cover the story."

The magnitude of the Japan story convinced CNN to fly in its big guns. For instance, Anderson Cooper did his AC360 shows from Tokyo from Sunday March 13 through Friday March 18. As the Libyan situation heated up, CNN's attention turned to that location. However, at the time this story was written, the network had correspondents Anna Coren in Tokyo; Kyung Lah in Kitakami, northern Japan; and Gary Tuchman in Ishinomaki, Miyagi Prefecture.

"The situation is under constant review and the safety and well-being of our reporters in the field is our top priority," Leininger tells TV Technology. "We have several reporters throughout the region and teams in Tokyo as well."