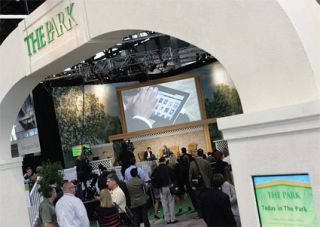 BOSTON—For its first-ever convention in this historic city, the National Cable & Telecommunications Association will leverage the technology and innovation resources of the region for its annual Cable Show convention at the Boston Convention & Exposition Center, May 21–23. In addition to an intensive line-up of convergence-oriented issues—including multiscreen delivery, the DOCSIS evolution, gigabit networks, ultra-high definition TV delivery and Internet Protocol strategies—NCTA has invited schools and high-tech companies from the area to participate in its enlarged "Imagine Park" and other Cable Show venues where they can show off their latest concepts in telecommunications, media and information technology.

"The Cable Show demonstrates cable's advanced platform while hosting vibrant discussions of latest business and policy issues critical to our industry," says NCTA President/CEO Michael Powell, who is completing his first year as association leader. Citing "powerful consumer devices" and "limitless entertainment choices," the former FCC chairman told TV Technology, "We are especially excited the show for the first time is headed to Boston, a place where innovation is second nature for the thriving technology businesses and some of our country's greatest academic institutions."

Many cable technology breakthroughs will be showcased in “Imagine Park,” an expanded version of the “park-like” setting on the show floor introduced last year. Neil Smit, convention co-chairman and president/CEO of Comcast Cable, also cites Boston as "an incredible innovation and intellectual ecosystem and home to some of America's best universities, thought leaders and visionaries.

"It's a perfect city to demonstrate the cutting-edge distribution technologies being developed by our industry and the amazing, award-winning content that consumers value," Smit says.

NCTA's respect for the local academic environment will certainly be evident. Commencement ceremonies at Harvard University, Boston College and Boston University (among others) are scheduled during or adjacent to the Cable Show dates, driving up local crowds and hotel prices. (MIT's graduation comes two weeks later.)

INSIDE AND OUTSIDE THE BOX

The Cable Show itself, which is expected to attract 12,000 to 13,000 attendees—about equal to last year's Chicago convention—will also confront an array of technology, public policy and competitive marketing issues that affect the industry. Among the issues likely to generate considerable corridor conversation is the fate of the set-top box business. Google's looming acquisition of Motorola plus continuing gossip about Cisco's revision of its STB business have raised questions about the future of the set-top box.

At the same time, the growing role of Internet Protocol, which will be addressed in several technical sessions, will also be on the minds of cable technology experts as the industry looks at DOCSIS (Data Over Cable Service Interface Specification) extensions, which some—but not all—engineers call "optical Ethernet." One technical session focuses on Gigabit Networking will several others examine wireless and spectrum issues, including a technical look at "Widening Cable's Wi-Fi World."

Also top-of-mind is the outlook for interactive advertising in the wake of the severe cutbacks in February at Canoe Ventures, the industry collaboration that sought unsuccessfully to develop formats and systems for interactive ads. Two sessions, produced in collaboration with the Cable Advertising Bureau, will examine ad issues. CAB will also release results of a new study looking at how consumers use different video platforms. Another session examines ethnic platforms.

Michael Powell, president of the National Cable & Telecommunications Association Speakers are likely to dance around the pending deal between Verizon and several cable multiple system operators regarding sale of the MSOs' spectrum to the telco because of the "ongoing Congressional and regulatory scrutiny," as one insider put it. The Cable Show agenda is likely to include discussion of the "pure marketing and implementation" aspects of the wireless juggernaut, he said on background.

Beyond the technology orbit, the Cable Show will feature its usual assortment of policy deliberations. Federal Communications Commission Chairman Julius Genachowski will speak on Tuesday morning, and FCC Commissioners Mignon Clyburn and Robert McDowell, plus about a dozen FCC staff members and an equal number of Capitol Hill staffers, will take part in panels during the three days.

"Show-biz" remains a part of cable's agenda. The celebrity lineup includes an onstage interview with Conan O'Brien, host of the eponymous TBS show. He will chat with Piers Morgan, host of the like-named CNN primetime show. Their topic: O'Brien's use and opinions about social media and interactive programming, plus his life in the TV business, probably including his experiences at NBC in its pre-Comcast era.

From the industry's business side, the top executives of cable operating companies, program networks and media/entertainment purveyors will chat during on-stage general sessions. Among the participants this year are Ted Sarandos, chief content officer of Netflix—considered by many to be cable's most significant rival—and David Stern, commissioner of the National Basketball Association. From the cable industry, participants include Glenn Britt, chairman/CEO of Time Warner Cable; Jeff Bewkes, chairman/CEO of Time Warner; Pat Esser, president of Cox Communications: and John Skipper, president, ESPN, and co-chairman of Disney Media Networks.

Many of the tech breakthroughs will be showcased in "Imagine Park," an expanded version of the "park-like" setting on the show floor, introduced last year, with benches and casual chairs. At least 30 companies, including start-ups and veteran exhibitors, are expected to pitch their wares during nine one-hour, talk show-like sessions that will run in Imagine Park.

"We added the word 'Imagine' this year as a call to action," she says. "Imagine a world where powerful networks and software make TV better." York envisions that many of the discussions will look at second-screen and smartphone applications, on-demand programming, advanced search/navigation systems, social TV and emerging digital platforms from a content providers' perspective.

All of the convention's general sessions and the Imagine Park discussions will be streamed live and archived for future review via www.live.TheCableShow.com

In addition, about three dozen hardware and software companies will showcase their technologies and services in the traditional "CableNET" section, which emphasizes devices and systems for specific opportunities in the cable ecosystem. This year CableLabs, which coordinates CableNET displays, is including a "CableNEXT" area where cable operators will demonstrate leading-edge technologies.

Moreover, in line with the SCTE's recent emphasis on energy conservation, CableNET will include "Energy Lab," a 30-foot-square section with six demonstrations about the cable industry's efforts on energy savings.

Overall, about 240 exhibitors will set up displays on the show floor at the Boston Convention & Exposition Center. That's down about 10 percent from last year's 270 exhibits, a reduction that NCTA York attributes to consolidation within cable's vendor community.