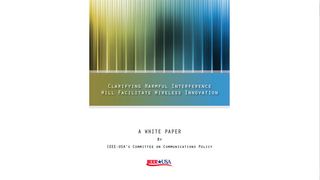 WASHINGTON: The Institute of Electrical and Electronics says the ambiguity associated with the regulatory definition of radio frequency interference is an obstacle to investment and innovation. In a newly released white paper, the IEEE Committee on Communications Policy advises federal regulators to refine their definition of interference, and to make their related deliberations more transparent. The paper targets the National Telecommunications and Information Administration and the Federal Communications Commission.

“In the regulatory status quo, the FCC makes determinations of harmful interference... based on the cryptic definition in its rules, and on vague past precedents,” the paper states. “In cases involving possible interference to federal government systems… rules need only be made public just prior to any FCC decision. In general, there isn’t even agreement, in many cases, on which past precedents are applicable.”

Current RF rules generally prohibit a new spectrum licensee from creating “harmful interference” affecting an incumbent. The definition of “harmful interference” comes from the International Telecommunications Union: “interference which endangers the functioning of a radio navigation service or of other safety services, or seriously degrades, obstructs, or repeatedly interrupts a radio communication service operating in accordance with ITU Radio Regulations.”

The white paper, entitled, “Clarifying Harmful Interference Will Facilitate Wireless Innovation,” says this “conflict between the interests of incumbents and innovators explains the difficulty regulators often have in devising a regime in a way that pleases all parties involved to address the overall public interest.”

LightSquared was mentioned as an example of this type of conflict. LightSquared proposed creating a terrestrial 4G wireless broadband network in L-band spectrum dedicated for mobile satellite service, and received a conditional waiver from the FCC to do so. The condition was, that LightSquared’s network would not interfere with global positioning systems in an adjacent spectrum band. Interference was demonstrated, however, and the waiver was rescinded. LightSquared, privately funded to the tune of $3 billion through New York-based hedge fund Harbinger Capital, filed for bankruptcy in May.

The authors of the white paper, including spectrum policy consultant Michael J. Marcus, took the NTIA to task for the way it handled LightSquared. Marcus followed the controversy in his industry blog.

In the white paper, he and his co-authors charge the NTIA with giving “due deference” in the LightSquared/GPS deliberation to the Executive Steering Committee of the Interagency National Executive Committee for Space-Based Positioning, Navigation and Timing, or EXCOM. “… a group which, unlike FCC and NTIA, has no statutory charter in spectrum management. The FCC has not sought input from its Technical Advisory Council, and NTIA has not sought input from its Commerce Spectrum Management Advisory Committee in this matter or any other harmful interference matter.”

The paper further notes that the NTIA set out to identify interference protection criteria (IPC) for wireless systems in a two-part study commenced in 2003 for President George W. Bush. The first part was to review and identify current policy; the second was to make recommendations to refine and improve IPC policy.

“In the six years since the Phase I Report, NTIA has never produced the Phase II Report, probably because it underestimated the complexity of this use and its implications,” the white paper states.

The document also discusses key technical issues such as IPC at the receiver, power flux density at the antenna, propagation models and others. It says, for example that receiver interference metrics are relatively well established for digital television at around a -6 to -10 dB interference-to-noise power ratio. The ITU recommends that total interference from all emission sources to a DTV receiver not exceed 10 percent of its total noise power. The paper’s authors recommend that this 10 percent criterion “be used as a starting point for determining what clarification on interference/signal protection is appropriate for TV broadcasting, subject to FCC jurisdiction.”

With 2G and 3D cellular systems, the I/S determination is more complex because it depends on cell site capacity, the authors say. The FCC proposed using a system based on interference temperature, but it was shot down by the wireless industry. On the subject of antennas, the paper says newer multiple input/output technology—MIMO—will figure significantly in the future because of its ability to reject undesired signals.

“Any harmful interference regime will have to consider how much to budget for I/S reduction attributable to the antenna system,” the white paper states.

As for propagation models, the paper notes that the disparity between types of radio systems makes accurate prediction difficult—perhaps to the benefit of some licensees.

“It seems realistic harmful interference determinations will depend on realistic propagation modeling—something that some segments of the wireless community would like to avoid, if traditional models give them a better position,” the paper states.

Minimum coupling loss and stochastic modeling are also addressed. Determining interference using MCL defaults to a worst-case scenario and therefore favors incumbents, the paper said. It recommends that the FCC establish a clear policy on using MCL or stochastic modeling, as well as minimum protection distances between transmitters and receivers.

The authors conclude that establishing the type of interference protection criteria necessary to attract investment will take more than the usual FCC rulemaking cycle. It suggests the agency consult with the National Academy of Sciences and the National Research Council, as it did to resolve satellite and terrestrial use of the C-band in the 1970s. Another possibility is having the president appoint a “Blue Ribbon Commission” on spectrum reform.

“This type of bold step may be necessary to break from the past deadlock,” the paper says. ~ Deborah D. McAdams

See…
May 14, 2012:“LightSquared Files for Bankruptcy”
LightSquared has filed for Chapter 11 bankruptcy in Manhattan, listing more than $1 billion in debts and in assets. The company said it filed voluntarily to give itself “time to resolve regulatory issues that have prevented it from building its coast-to-coast integrated satellite 4G wireless network.”