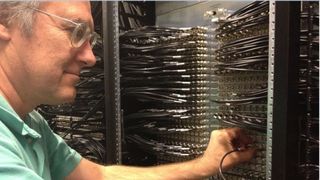 Hollywood post-production powerhouse Modern VideoFilm has chosen a UTAH-400/XL routing switcher from Utah Scientific to serve as the core of its infrastructure in its new 96,000sq-ft facility in Burbank, CA, which is the headquarters for its multi-city operation. Modern VideoFilm is using the new router to interconnect the facility's equipment and systems that record and monitor SDI video with embedded audio and timecode. The UTAH-400/XL router also connects with a smaller UTAH-400 router that Modern VideoFilm purchased for its new Santa Monica, CA, facility.

The UTAH-400/XL router sits in a 1056 x 1056 chassis, which Modern VideoFilm has filled with I/O cards for 912 inputs and 804 outputs. The empty card slots give Modern VideoFilm room to grow simply by adding more cards.

The UTAH-400/XL also has full-size BNC connectors rather than the smaller connectors found in many other routers, a feature that allows Modern VideoFilm to use BNC cross-connect cables for physical configuration and signal troubleshooting rather than operate patch bays. Modern VideoFilm installed the router so that all the rear-panel BNCs face the front, making it easier for engineers to access the ins and outs that connect the BNC bulkhead panels to racks directly adjacent to the router. It was for this very reason that one of Modern VideoFilm's requirements was a single-chassis router.

Because everything is connected to the router, signals are distributed electronically over the building's extensive fiber network with no need for patch bays or distribution amplifiers. The UTAH-400/XL is part of a system of digital switches that includes SDI, RS-422, Fibre Channel and Ethernet. The set-up process for different shows is quick and efficient because Modern VideoFilm can simply hot-switch the signal from one show to another.