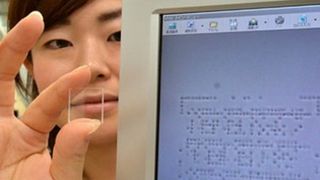 Hitachi has developed a new highly durable, heat- and water-resistant medium for data storage it calls “Quartz” that can hold data “for hundreds of millions of years.”

The company said information is stored on slivers of quart glass that can endure extreme environmental conditions without degrading. The new technology, currently in prototype form, stores data in binary form by creating dots inside a thin layer of quartz. It can be read with an ordinary optical microscope and associated software package.

A Quartz storage module is 0.8in square and 0.8in thick and consists of four layers of dots that can hold about 40MB of data per square inch — about the same as a music CD. It is made up of the same material used to make some beakers and other instruments for laboratory use, and can be exposed to a high radiation flux or heated to 1832F for at least two hours with no damage to the lattice or the data.

The Quartz material is resistant to many chemicals, has a high resistance to radiation and is unaffected by radio waves. The researchers believe that adding more layers to the substrate should not be a problem. “We believe data will survive unless this hard glass is broken,” senior researcher Takao Watanabe told Tom’s Hardware.

Hitachi said it might bring the technology to market by 2015, but said the first users would probably be the U.S. government, museums and religious organizations — groups with large amounts of historically important cultural artifacts or public data to preserve.

“Initially this will be aimed at companies that have large amounts of important data to preserve, rather than individuals,” Tomiko Kinoshita, a spokeswoman at Hitachi’s main research lab, told IDG News Service.

Hitachi will need at least three more years to commercialize the technology, Kinoshita said. However, he currently envisions a system where customers send their data to Hitachi to be encoded. The company is developing the technology in conjunction with a research lab at Kyoto University.