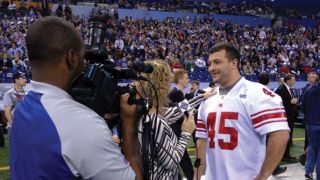 Cellular-based bonded uplink is becoming a frequent sight in sports venues. By using portable devices that bond together multiple 3G, 4G and other data connections, broadcasters can now quickly transmit live video from anywhere at lower costs than traditional uplink solutions, as well as transmit on the move or inside structures without line-of-sight or cabling restrictions. This has led to a variety of applications, such as transmitting a much greater number of live varsity games, sports news hits from the road, complete live press conferences and previously impossible live footage from inside locker rooms, golf courses, race tracks and more.

However, while allowing greater flexibility and lower costs, it is also important to understand limitations of transmitting over public cellular networks, and to use the technology in ways that produce the best results.

Live transmission from events like the NFL Super Bowl is among recent uses for cellular bonded technology.

Bonded cellular video technology is an aggregation technique designed to group several physical links into one logical link. This provides fault-tolerance and high-speed links between the aggregation device and its paired bonding server.

The technology enables the use of several links (from two to 32) and combines them to create increased bandwidth and the data/video trunk. Should links fail, the bonding technology automatically redistributes traffic across remaining links. Automatic redistribution is done in typically less than 100ms, so no outage is noticed. In practice, a number of separate cellular or other data connections — which, individually, may not be very robust — are combined into a bigger pipe. This pipe can transmit despite any temporary individual lost connections to the cell tower or lost packets on the way to the server, for example. Data connections can include 3G and 4G modems across most major U.S. cellular carriers, as well as Wi-Fi, WiMAX, Ethernet and even portable satellite links.

The bonding device encodes video coming from a camera or a field switcher, dices it into multiple data packets and transmits each group of packets through a different modem or carrier. Information travels through cellular towers and the public Internet, and arrives in a receiver that recombines data into raw video again and then outputs it to a studio switcher (for on-air) or transcodes and sends it to a content delivery network (for online).

Transmission rates can vary dramatically based on location, time of day and number of people in a certain area. In good 4G areas, transmission rates may be as high as 10Mb/s to 12Mb/s, compared to an average of 1Mb/s to 3Mb/s in some 3G areas. Of course, it’s impossible to predict available bandwidth at a govem to,e. Therefore, another job of the bonding solution is to characterize each link every few milliseconds in terms of bandwidth, delay and loss rate. Then, it creates a Gaussian normal distribution graph for each parameter, assigns a real-time weight based on the graphs, and feeds this weight to the scheduling/queuing process. This allows for the best real-time decision regarding which link the next incoming packet should use. Typical bonding techniques use the following methods to overcome fluctuations:

A good bonding engine will receive from the user general preferences (low delay, best quality, etc.). Based on these, it will automatically adjust bonding parameters. This means the engine will decide on a packet-by-packet basis how much FEC overhead to use, the optimal encoding rate, what resolution to use at any given time, what frame rate to use, what packets to drop under extreme low BW cases, what packet lost recovery mechanism to use (retransmit, FEC, error concealment, bad frame skip), and how to promptly compensate the overall system knobs upon any network behavior changes that affects the uplink capabilities.

Some of the most frequent recent uses for sports coverage include:

Traditional uplink solutions provide guaranteed bandwidth. Yet, these can be costly and require line-of-sight, cabling or fixed locations. Cellular bonded uplink can vary in transmission rates, but it opens a variety of sports live coverage opportunities from new locations and on new platforms by understanding needed parameters. Networks, stations, new media publishers, leagues and teams can optimize the use of cellular bonding and create a breadth of new content offerings that were once too expensive or complex to produce.