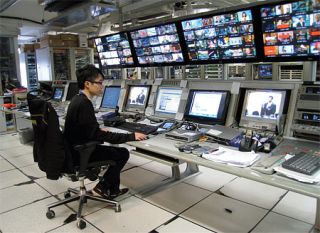 Hong Kong Broadband Network (HKBN) is an IPTV service provider located in Kwai Chung, Kowloon. The company started a ground-breaking, subscription-based, IPTV service for the whole of the territory of Hong Kong in 2003. But now HKBN has plans for a free TV service -- using its extensive fibre network – that could upset all of its competitors in the Hong Kong market.

"Currently we are providing a Video over IP subscription TV service; much like our competitors i-Cable TV and NOW TV,” says Lo Sui-lin, HKBN’s CTO. It is this same IP platform that HKBN is now considering for its new free service.

Lo reminds that IP delivery makes possible SD, HD or even 3D, and around 100 channels, for whatever the market may dictate.

Lo Sui-lin, HKBN's CTO Most of the content for the ‘turn-around’ channels the company currently broadcasts comes from overseas. "Much of the market in the Asia/Pacific region still uses the 4x3 aspect ratio, so we have to provide programmes that are in SD," Lo explains. 'Turn-around' refers to the fact that HKBN receives programmes from content providers in places like Singapore, America or Britain.

This is why HKBN has so much SD content, because “the quality of the content is decided by the content provider, not by us,” says Lo. “However, our infrastructure is able to support HD, and in fact we do have one HD channel right now -- Luxe TV, showing movies and documentaries."

HKBN receives its satellite broadcasts by way of an IRD provided by the content provider. The encoding and video systems used overseas may not necessarily be the same as those used in Hong Kong (e.g. requiring NTSC to PAL conversion, or an H.264 to MPEG-2 transcode). "So we may need to encode the video again at our broadcasting centre, using Harmonic encoders,” Lo says. “The video is then transmitted over our IP network into the subscriber's home. Each subscriber is provided with a set-top box, which converts the IP video into analogue composite video, or HDMI.”

"Our competitor, i-Cable, uses much the same technology -- although the transmission path is different,” he adds. “We are using broadband Internet Protocol (IP), while for their backbone they are using hybrid fibre coax (HFC)."

With its 1.25 million telecom users, Hong Kong Broadband Network introduced its IPTV service in August 2003. Today nearly 180,000 of these telecom customers are HKBN subscribers. That’s no small achievement, considering how sceptically IPTV was regarded back in 2003.

"In those days," Lo explains, "the idea was that as video frames are time-sensitive, they have to be carried over a TDM (time division multiplexing) network. Only with this technology, it was felt, could you ensure there was no delay to any frames."

Until that time, IPTV transmission operated on a ‘best efforts’ basis. There was no guarantee that the packets wouldn't go somewhere else on the way to the customer. “For instance," says Lo, "some of them might make a round trip and go via the US, before looping back to Hong Kong."

With no dedicated and pre-assigned path, it’s possible to receive the 10th frame while the first nine frames were still being transmitted over the network.

"Since the bandwidth requirement for video is much more than that required for audio, many people had doubts about our ability to successfully transmit video via IP,” says Lo. “For audio, you only need 64K bits; but for video the bandwidth required is measured in terms of megabits, as there are many more packets to transmit. This also means the chance of losing packets is much higher, because more packets are being sent at the same time. So, at that time, most people didn't believe that the IP network could effectively carry videos."

To address this issue, HKBN programmed in a QoS guarantee so that its IP network would prioritize video packets over others. The QoS is an old concept, but until 2003 there had been no real large scale implementation.

"Many people doubted we could achieve the same quality as a dedicated fixed route -- and to tell you the truth, we also had our doubts!” Lo admits. “We therefore decided to adopt a single-vendor strategy for our equipment sourcing. Now [that] all our transmission equipment is from Cisco, and with efforts from both our companies, we've made it. Using IP technology, we can ensure that there is no time delay. From that time on, I think we became one of the leaders in this field."

But HKBN, is not content to rest on its laurels. “Currently, with our IPTV service, viewers have to spend another HK$500 -- about half the price of a small TV -- just on the set-top box before they can see anything,” Lo says. “So, in order to expand our market, our primary focus now is to develop our plans for a free domestic TV service, which, like terrestrial TV, will be financed by advertising. Although there are still some hurdles to be overcome, I believe the technology we are using will be sufficient to meet the task."

To achieve this goal, HKDN has already bought 200,000 sq ft of land in Tsueng Kwan O, in east Kowloon. Once their plans for a free TV service receive final government approval, it plans to build a large seven studio complex; making productions it also hopes to sell abroad.

"For subscription TV you need a set-top box, to convert IP videos back to normal composite videos,” says Lo. “But for the Free TV service, we will be using HFC distribution [without the need for a set top box in the consumer's home]. As an established Fixed Network operator in Hong Kong, we are fibre-rich. We have fibre everywhere, and we will build on that to create another HFC network in Hong Kong. With our business model, the service will be free -- everyone can watch our TV service, without having to buy a set-top box."

Currently, TV viewers in Hong Kong are able to watch one of the four SD channels from the two terrestrial broadcasters, TVB and ATV. The signals come in to an antenna on the roof of their apartment buildings. Here the signals are amplified and distributed around the buildings.

HKBN already has fibre in place in Hong Kong’s apartment buildings, due to the previous deployment of its IPTV service. This fibre will bring HKBN’s Free TV to local residents.

"We plan to simply join the distribution circuit of each building, so all the residents can watch our programmes as an alternative to those broadcast by ATV and TVB,” says Lo. “As long as they have a TV in their flat, they can watch our free programmes. Up to 30 channels are planned initially.”

To say the least, HKBN’s Free TV service could shake up Hong Kong’s television distribution industry. “Whereas before, with IPTV, we were not a direct threat to the terrestrial broadcasters, in the very near future, I guess we will be,” Lo muses. “(And also) to Hong Kong's i-Cable TV, and the other subscription-based IPTV operator, NOW."

It's a "threat" probably none of HKBN’s competitors could have foreseen in 2003, when the Hong Kong Broadband Network first started its IPTV service.