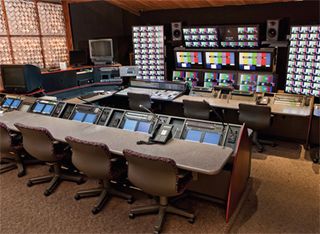 For more than six years, "The Martha Stewart Show" has also called Chelsea Television Studios home, and last summer, before the show made its move to the Hallmark Channel, we decided to upgrade our facilities for full high definition.

Both of our large studios regularly accommodate live audiences and can support up to 10-camera productions. In an effort to maximize efficiency and provide redundancy, we outfitted both control rooms with new HD switchers, state-of-the-art digital audio consoles and other equipment. At the heart of the upgrade was a new PESA Cheetah 256x256 router, which we use to move signals between studios.

We chose the PESA based on our long and successful history with their routers in AMV's truck fleet. We also rely on a PESA router at the AMV Gateway teleport, our international transmission center in New Jersey.

The new HD Cheetah routing switcher is connected to a second Pesa router in our facility, which handles signal distribution between our edit suites, as well as fiber transmissions to the AMV Gateway teleport.

When we upgraded our studios, we also invested in a PESA Cheetah DRS series router which uses multiplexing technology for audio signal distribution. Now, we can take embedded audio from our VTRs and distribute it in either AES or analog formats to any destination without external conversion. This saved us the hassle and expense of wiring all of our audio sources to a central crosspoint matrix array. Instead, the sources are wired locally, and then distributed throughout our facility using CAT-5 cable.

PESA has made it easy for us to not worry about the routing of our many signals. The company sent a technician to help with the router's initial setup and testing, and was very helpful in making sure that we had all of the accessories and controls that we needed.

Initially, we had some mux/demux concerns over connections between the Cheetah and our Sony PDW-F1600 compact XDCAM HD recorders. However, Pesa was able to make adjustments to the router's protocol quickly and easily to accommodate those signals and they've been flowing flawlessly ever since.

With PESA at the core of our HD upgrade, we are confident that we can handle any production challenge. Last month, for example, we had the orchestra for the Tony Awards in studio B feeding audio bi-directionally through the Cheetah for the live three-hour broadcast. We used the router to embed and de-embed AES audio for distribution of signals to a mobile truck, as well as sending and receiving five four-wire analog intercom channels via uncompressed 1.5 Gbps fiber from the remote theater to our studio. The router's operation was totally invisibly and this allowed the crew to concentrate on the production. Additionally, we were able to reduce the amount of outboard processing and conversion gear that would have been required in the past.

Steve Bickman is general manager of studio operations for Chelsea Television Studios. He has worked in the television industry for 20 years, and has been with Chelsea for 16 years. He may be contacted at sbickman@amvchelsea.com.