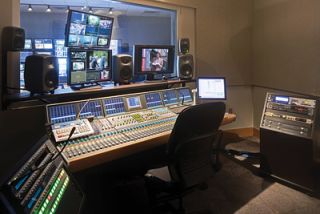 The Calrec Omega at Brigham Young University Broadcasting
PROVO, UTAH—Brigham Young University's BYU Broadcasting (BYUB) recently revitalized its facilities with a new 100,000 square foot building and a new 51-foot expanding mobile production truck. The aim was to build facilities that would allow us to increase dramatically the quantity and quality of content that we distribute via the operation's multiple worldwide TV, radio and digital media outlets.

BYUB provides a mix of live and recorded productions, including sports, concerts, theatrical performances, and documentaries. One of our key objectives was to upgrade to HD and 5.1 across all productions and points of distribution. In order to maximize the potential for versatility and simultaneous production of multiple events, we installed a fiber infrastructure that networks the main fixed-facility with other key venues on campus,. These include an adjacent basketball arena, football stadium, soccer stadium, volleyball courts, theatrical and concert halls, and lecture halls. With this system in place, we can produce content at these sites from our main facility, while freeing up the production truck to cover events at more distant locations.

As part of this "connected" approach, we chose Calrec's audio systems, which were designed to support the kind of distributed production methods that we envisioned. We installed a Calrec Omega audio desk in each control room's audio area, and networked these through Calrec's Hydra audio routing system. This technology allows us to perform audio mixing for a production at any of these campus locations at our main facility.

The Hydra plug-and-play architecture makes connecting consoles together very simple, as a single connection between routers provides 512 audio signals in both directions and allows for enormous network expansion. As the Hydra does not need an entire console system to function, complex networks can be created very cost-effectively.

Our Omega audio consoles provide 240 channel processing paths packaged as 72 stereo and 96 mono channels, and allow us to create as many as 39 5.1 surround channels. The Calrec desks are popular with our audio engineers, who find them especially easy to use and like the design of the menu and fader bank system.

During the project's construction phase, installation of the Calrec systems was straightforward and trouble-free, with the networked audio very easy to set up. Once operational, these systems have delivered on their promise, allowing us to achieve exactly what we'd set out to do.

Deploying the Calrec systems has enabled us to produce events at remote locations without having to deploy a production truck to each event site—one of our biggest project aims. We can now produce multiple events simultaneously around campus by using our two fixed control rooms and the mobile truck. With the Hydra units providing a network of audio sources in our building, we can use either of the two control rooms to produce content out of any of the three studios by simply routing audio sources to the appropriate Omega. This has greatly reduced scheduling constraints, allowing us to produce much more content than was previously possible.

Brandon Smith has worked in broadcast engineering for 16 years, with the last six of those with BYU. He may be contacted at brandon.smith@byu.edu.

For additional information, contact Calrec Audio at 661-753-3053 or visit www.calrec.com.