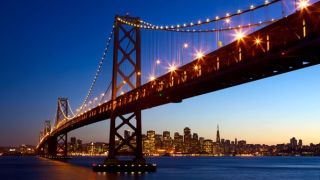 I always know fall is coming when it’s time to attend the Audio Engineering Society (AES) convention. This year’s event is being held in San Francisco, Woo Hoo!

The convention alternates between New York and SFO, but I’ll always take SFO as the better location. First, the convention center is more convenient and the city just seems a better place to play. Trolleys, Coit Tower and of course, Fisherman’s Wharf. For me, that beats a bus ride to and from Javitts anytime.

After touring the convention floor on day one, what did I find? First of all, I met Andrew Kornstein. He is Sennheiser’s Market Development person for House of Worship. What was interesting is that he just happens to live a few miles from me in Kansas City! Who knew we’d travel a thousand miles to meet at a trade show.

In talking with DPA’s technical sales peron, Bryce Boynton, I mentioned that I felt that audio was sometimes considered the step child of television. While loudness has recently gotten more than its fair share of attention, when it comes to capturing sound, many TV engineers are left with antiquated tools, and perhaps similarly dated skills.

Boynton offered a solution every TV audio person should checkout.

DPA microphones maintains a web site crammed with tutorials on microphones, their selection use, and selection. Engineers can learn about a variety of technology focused on the use of microphones. For instance, need to test a microphone, there’s a tutorial.

There are guides on “Electronics designs in microphones”, “Instruments and acoustics with microphones” and many more.

And you won’t be find the information overly sales oriented. It’s good tutorial, check it out.

I then moved over to the Sound Devices booth and talked with Managing Director, Jon Tatooles. He showed me theSound Devices’ 664 Production Mixer. The mixer provies six input channels with dedicated controls for trim, fader, pan and PFL. The inputs and four output buses are all recordable, providing a total of 10 tracks of record channels.

The 664 contains six ultra-low noise, high-dynamic range and transformer-less preamps, which accept mic- or line-level signals and include analog peak limiters, high-pass filters, input trim control and direct outputs on every channel. The 664 also has numerous digital capabilities. Inputs 1 and 6 can be selected as AES3 or AES42 inputs for digital microphones, each with its own SRC for simplicity in system clocking.

I’m not used to mixers actually recording signals, but the 664 can record up to 10 tracks of 16- or 24-bit broadcast WAV files to SD and/or Compact Flash cards. All inputs and outputs are individually selectable for recording, again enabling the mixer to record all 10 channels of audio. With its dual card slots, content can be recorded to either or both cards simultaneously, with the added ability to assign different tracks to each memory card.

The mixer even has an Ambient-based time-code generator/reader for multi-camera and double-system sound applications. All common production time-code rates and modes are supported. Sound Devices has a demonstration video for those who’d like to know more.

I was a bit surprised to see a video recorder at AES, but Sound Devices was showing off it’s PIX 260i Production Audio/Video Recorder. Based on the company’s PIX 240i recorder, the rack-mounted PIX 260i is a file-based audio/video deck that seamlessly replaces tape-based video decks in production and post-production environments, while offering 32-tracks of audio record/playback.

Tatooles said “We are excited to showcase the PIX 260i at AES. Its impressive 32-tracks of audio record and playback is a great feature for many audio professionals. Our entire line of PIX recorders provides users with an all-in-one audio and video product.”

The recorder has a built-in, five-inch 800- x 480-pixel IPS video display providing an intutive interface for viewing video and setup-menu selections. The PIX 260i can be controlled by both external RS-422 and via Ethernet through its embedded Web server, allowing for machine transport control over Ethernet-based networks.

Tatooles showd me how easy it is to connect up to four SATA drives from the front panel. If you need RAID-type redundancy users can recorder to all four drives simultaneously.

The Eclipse HX systems, comprising the Eclipse HX-Omega, Eclipse HX-Median and Eclipse HX-PiCo, as well as the EHX software, are based on the original, powerful and comprehensive Eclipse digital matrix platform. All retain the legacy platform’s unique integration capabilities. Additionally, Clear-Com’s V-Series panels, frame cards and interfaces are compatible with the new Eclipse HX range, providing a seamless logical upgrade path for existing Eclipse customers. What sets Eclipse HX apart from the original Eclipse line are improvements in the software architecture, user interface and system capacity.

Said Peter Stallard, Senior Product Manager, Eclipse, Clear-Com, “In broadcast facilities where matrix intercom systems and resources are often shared across multiple studios, having fast and highly intuitive systems is critical when scarce engineering resources are needed to execute system-wide changes reliably, in real-time and with minimal impact on system users. Also, the Eclipse HX systems have the ability to make changes on the fly, which is especially important in OB vans and other live operations.”

Second, Live-Recorder combines Soundscape V6.2 DAW recorder/player software and a MadiXtreme or MX4 PCIe audio interface with an industrial-strength, high-performance 1U rack-mounted PC. The Soundscape 6.2 software is a powerful audio-only multi-track DAW recorder/player. Soundscape V6.2 has SSL’s “Pro-Convert” technology built in, so it can export recorded multi-track sessions in a range of formats native to a selection of popular DAW packages for editing and mixing. The Soundscape V6.2 software provides comprehensive non-linear editing capabilities plus the capacity to add extensive notes and metadata.

At the heart of the workstation is SpotFire, a dedicated session management and automated ADR interface which provides complete control of studio session workflow. SpotFire offers a unique interface that combines a ‘rehearse - record – review’ based transport control panel with a versatile and customizable Take List that makes viewing, navigating and controlling the recording process simple and efficient. SpotFire relies on SSL’s Soundscape DAW as the underlying platform for recording, editing and mixing with all track arming, transport and recording functions controlled entirely by SpotFire’s dedicated ADR interface

RTW was exhibiting at AES showing their latest line of visual audio meters for professional broadcast, production, post production and quality control. Highlighted in the booth is the new version of its successful TouchMonitor TM3, called TouchMonitor TM3-3G. The TM303G seamlessly allows the TM3’s current hardware and software design to visualize, convert and replay 3G SDI signals in TV and video production and post production applications, offering a feature set unrivalled in its class.

The TouchMonitor TM3-3G is a compact solution for metering, de-embedding and monitoring 3G SDI audio. It features a 4.3-inch touchscreen for horizontal as well as vertical orientation and can display any of the eight audio channels contained in a 3G SDI stream.

Well, that's it for day one. Come back tomorrow and I'll show you what else I found.