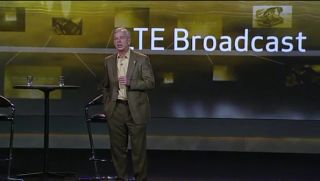 There’s a new broadcaster coming to your market in the not too distant future, but this one has no call letters, nor a big stick.

In fact, this digital television broadcaster will have no obligation to serve the public interest, convenience and necessity; no localism requirement to fulfill; no ownership rules to adhere to; no children’s programming mandate; nor a government requirement to make a public file available online. In fact, it won’t even be asked to consider putting its spectrum up for auction. What’s more, this new digital television broadcaster will ultimately transmit much of the same popular entertainment and sports coverage you may be carrying today on your airwaves in your market.

Who is the mystery digital broadcaster, this digital repeater of broadcast content? Who is this new entrant that is allowed to sidestep the myriad rules and obligations today’s television broadcasters have complied with and fulfilled for more than 60 years?

It is Verizon Wireless, of course, with its “largest 4G LTE” network in the nation. During a keynote speech at the 2013 International CES in Las Vegas last week, Verizon Chairman and CEO Lowell McAdam unveiled LTE Broadcast, a “new” concept that will allow the wireless carrier to head off the spectrum crisis (or is that spectrum crunch, I can’t remember) created by the insatiable demand for video on smartphones, media tablets and other wireless devices.

As McAdam explained during his address: “We are also developing a service to broadcast live video over LTE. Now to do that today, we have to dedicate a separate channel to each individual user, which uses up capacity pretty fast as you can imagine. With LTE Broadcast, we’ll be able to stream to everybody over the same channel at the same time. This will give content owners new ways to reach their audiences, whether it be for sports, for concerts or even college classes. Our goal is to break down the barriers between home and mobile once and for all and come up with new video services that can move seamlessly across any platform and any device.”

What a revolutionary concept! Transmit, excuse me, that’s stream, “to everybody over the same channel at the same time.” Where have I heard of that before? Oh, that’s right. There’s already nearly 1800 full-power commercial and public television stations that are streaming, excuse me, that’s transmitting, digital video and audio content on their own “same channel at the same time” to everybody.

Sure, traditional television broadcasters have their own ATSC standard, and Verizon Wireless’ LTE Broadcast will be based on evolved Multimedia Broadcast Multicast Service (eMBMS) standards adopted by a telecommunications standards group. But it’s still broadcasting video and audio over the air digitally to receivers in the hands of the public, albeit the paying public.

No wonder Mark Aitken, VP of Advanced Technology for the Sinclair Broadcast Group, didn’t get any traction for his idea of a digital television broadcast overlay onto the nation’s cell phone network presented at the 2011 SMPTE Annual Technical Conference & Exhibition. As Aitken saw it, doing so would leverage the strength of television transmission — the one-to-many model — while allowing individuals to continue accessing the individual video clips they wanted on a unicast basis via the cell phone network. In other words, watch PSY perform Gangnam Style for the billionth time on YouTube or Lady Gaga and Beyoncé’s “Telephone” performance online via the cell network whenever desired, but watch the Super Bowl with millions of others at the same time via broadcast all on the same mobile device using two complementary technologies.

What Aitken couldn’t have known at the time, nor anyone else for that matter, is that the telephone company wanted to become a television broadcaster and would set about to support a one-to-many broadcast model on its own network.

It is more than simply ironic that the FCC is in the midst of its incentive auction rulemaking proceeding to work out the minutia of a gargantuan effort to recoup spectrum from television broadcasters to satisfy the growing demand for bandwidth on wireless networks, which is driven by demand to watch video, at the very time a giant wireless company has announced its effort to roll out a broadcast-based solution to meet the insatiable consumer appetite for video.

It is a classic example of the inequities, inefficiencies and inanity of what happens when the government gets involved in the market. Not only might Verizon head-off the spectrum crunch by innovating and thus throwing into question the raison d'êtrefor the auctions, but its LTE Broadcast also raises serious questions about the blatant unfairness of piling a withering load of regulations onto the backs of broadcasters while letting this new broadcast entrant cherry pick broadcast content for transmission with zero obligation to live by the same rules and regulations that the government says it’s put in place to protect the public.