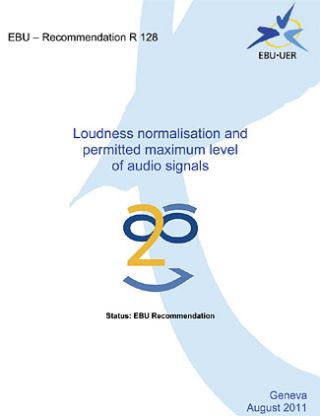 In the United States, we have seen the publication and amendment of ATSC A/85, the television loudness recommended practice, and the passage into law of the CALM Act, directing the FCC to enact measures using A/85 to control commercial loudness. Meanwhile, work on television loudness has been going on in Europe as well. What's that all about?

Before we look at what's happening with loudness, we take time out for this brief public service announcement. We learn from online health news journal HealthDay that researchers in Australia found that people who averaged six hours of television a day lived on average nearly five years less than people who do not watch TV, and that after age 25, every hour of television watching was associated with a 22-minute reduction in life span. So the message might be that we should avoid over-consuming our own product.

Now, back to loudness. A revised version of A/85 has been released by the ATSC, which incorporates Annex J, is purported to be suitable for citation by the FCC, and "contains all the courses of action necessary to perform effective loudness control of digital television commercial advertising."

In fact, this three-quarter-page annex contains little except some references to parts of the main document.

WHAT'S GOING ON IN EUROPE?

About a year ago at this writing, the European Broadcast Union (EBU), the organization of European state broadcasters, one of whose functions is to be a technical standards development organization, published "Recommendation R 128, Loudness normalization and permitted maximum level of audio signals."

These documents introduce the concept of the measurement gate to the loudness meter, and this gating function has subsequently been incorporated into ITU-R BS.1770-2, published in early 2011, whose measuring methodology underlies both R 128 and A/85. The gate pauses the measurement when the signal drops below a certain threshold.

Gating is done on 400 millisecond audio blocks, and there are two gating thresholds. The first gate is at –70 LKFS, the absolute silence gate, which assures that measurement only occurs when there is actually audio present.

The second threshold is relative, being 10 dB below the level measured after the first threshold is exceeded. The second gate assures that programming containing a lot of low-level audio has its loudness determined by the foreground sounds, resulting in better loudness correspondence to other program material that has less low-level audio.

Tech 3341 specifies a loudness meter operating in the "EBU Mode," which measures loudness as specified in ITU BS.1770-2 according to three integration times:

Momentary loudness uses a sliding rectangular time window of 0.4 second, and is not gated.

Short-term loudness uses a sliding rectangular time window of 3 seconds, and is also not gated.

The EBU, in order to rationalize the nomenclature used in BS.1770 and BS 1771, proposed naming and units as follows:

Two scales are specified for the EBU meter:

R 128 and EBU-Tech 3342 specify a loudness range descriptor (LRA), which quantifies in LU the statistical distribution of loudness within a program. No maximum LRA is specified, but LRA is intended to help the broadcaster determine when dynamic range compression or expansion might be required.

R 128 recommends that Program Loudness be normalized to a Target Level of –23 LUFS, with deviation generally not exceeding ±1 LU when exact normalization to a target level is not practical, as, for example, in live programs.

Finally, the EBU documents and BS.1770-2 specify a True Peak Level (TPL). Maximum TPL is the maximum positive or negative level of the signal waveform in the continuous time domain. We know that measuring the level of each audio sample does not yield the true peak level of the digitized waveform, as many peaks between samples exceed the levels of the samples themselves.

BS.1770-2 specifies an oversampling true peak meter that has an under-read of about 0.5 dB for a 4x over-sampling meter for a basic sample rate of 48 kHz. Therefore, R 128 recommends a Maximum Permitted True Peak Level of –1 dBFS.

Some serious work on loudness, and a significant advance beyond yesterday's peak program meters, have been accomplished by the EBU.

Randy Hoffner is a veteran of the big three TV networks. He can be reached through TV Technology.