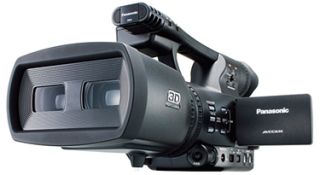 Unless you are that one guy in Lompoc who did not see "Avatar," you know what 3D looks like with a big budget on the big screen. But if the hope of home theater 3D is going to be realized, production companies are going to have to figure out how to produce 3D shows on a small-screen budget. Vertical Ascent is one of the first companies to tackle the challenge. You can see samples of their 3D work, even in anaglyph, on the company's website at verticalascent.net.

The series of 3D special event documentaries they are producing for iN DEMAND LLC includes coverage of the last space shuttle launch, visits to live Broadway shows, bicycle motocross, Mardi Gras and Cirque School, which will be distributed to U.S. cable systems and shown to consumers for free.

The series, produced by Iain Kennedy, was directed by multiple Emmy-winner Adam Friedman, shot by DP Marty Mullin and edited by Sean MacGowan, who doubled as digital imaging technician (DIT) on the set.

What made the project possible on a cable budget was the availability of the new all-in-one, twin lens 3D cameras from Panasonic. Vertical Ascent used several of the AG-3DA1 models recording onto SD cards, along with a preproduction version of the upcoming AG-3DPI that stores footage directly on P2 cards.

Panasonic AG-3DA1 They did have to use some larger beam splitter rigs for shots of the space shuttle launch to get a greater inter-axial distance and mount longer lenses. But as Friedman put it, "90 percent of the shooting was with the Panasonics; and Doug Leighton and his engineers were great at maximizing their performance for us. This production could not survive without those cameras."

Post production was squeezed into their budget by a combination of Apple's Final Cut Pro 7 NLE and CineForm's Neo3D codec.

"We also used Adobe's Premiere Pro to ingest footage shot in a file format such as MXF or MII that Final Cut Pro cannot import without transcoding," MacGowan said. "And, of course, we called upon Photoshop and After Effects for a lot of fixes."

The editing workflow began by ingesting the left/right eyes from the SD or P2 cards into the Neo3D software on a 12 core Mac Pro workstation equipped with an AJA Kona 3G card.

The two recordings were then muxed into a single stream, and MacGowan had to mount his 3D shutter glasses on his face just right so he could see the 2D GUI interface by tilting his head while still being able to see the stereoscopic images on his Panasonic BT-3DL2550 3D monitor.

One of the pitfalls unique to 3D that MacGowan had to overcome was "contrast ghosting" caused by crosstalk from the active glasses with which Vertical Ascent expected most of the audience would use to watch the series. It's a phenomenon caused by the shutter lenses not responding correctly to "hot spots" in an image. MacGowan was careful to limit the amount of objects in a shot that had high contrast.

Since some of the documentaries included archival footage, such as scenes involving the history of the space shuttle, some 2D-to-3D conversion was accomplished at LA Digital Post Inc. It integrates seamlessly into the 3D originated material and maintains the environment of Z-space.

Vertical Ascent covered the last space shuttle launch in 3D. Footage is available at verticalascent.com. Among the lessons editor MacGowan and producer/editor Kennedy have learned from this series so far is that you can't cut as quickly in 3D as you can in 2D; wide shots can tell their own story and should be allowed to linger; and it is best to limit the amount of images that pop out of the screen in what is called "negative space." But even this old-time 3D effect can have its place as in the documentary about Broadway shows where one of the actors shoots glitter into the audience letting the sparkly cloud spring off the screen, providing a moment of effective 3D fun.

"You are more deliberative in editing 3D," Kennedy said, "and let the cuts do more work within the shot more than trying to construct the flow outside of the shot. We've learned a lot during this process."

After a rough cut was approved by iN DEMAND, MacGowan would go into what they called "3D Police" mode, checking each shot individually to deal with issues such as edge violations, excessive divergence or critical misalignment concerns, and polishing the color correction. The master was delivered on hard drives to iN DEMAND as 23.98 fps, full 3D (1080P) ProRes HQ QuickTime files or 10-bit uncompressed HD video.

If original 3D dramatic or documentary productions are ever going to be a major part of 24/7 stereoscopic broadcasts, a lot of editors are going to have to master this multidimensional post-production workflow. But wearing his producer's hat, Kennedy thinks it will be worth it.

"Whenever we would show people 3D images on the monitor we took to the set, the reaction was usually 'Oh, wow!'" he said. "It's an additional layer of beauty and involvement with the subject that they did not experience before. I think home theater 3D will do to HD what HD did to SD."

Jay Ankeney is a freelance editor and post-production consultant based in Los Angeles. Write him at JayAnkeney@mac.com.