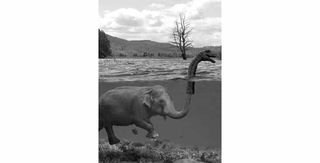 ABSTRUSITY– The failure to do a spectrum use inventory is one of the most egregious shortcomings of the National Broadband Plan, and may even threaten to derail it in the long run, as large corporations are allowed to sit on undeveloped spectrum even as they whine for more. The upshot of the NBP—a marketing strategy for establishing one man’s legacy as much as anything else—is that it will further consolidate power among the most powerful communications companies in the country.

Network neutrality is but a Band-Aid Brand policy statement designed to make it seem as if giant carriers won’t have their sway. Plus, it’s downright silly. Network neutrality purports to make Internet Service Providers let us search, seek and download anything we want off the Web without interference from them. Search engines already define the “worldwide” of what we do and don’t find on the Web, so imagining the courts will uphold network neutrality on carriers is on the side of delusional. Especially with Verizon’s hired guns taking on whatever poor soul the FCC sends in front of the judge.

Ascertaining how much spectrum is being used for what, the state of build-out on licenses not-yet deployed, and determining the most efficient and productive use of each frequency would be a big job indeed, but not impossible. That’s what the National Telecommunications and Information Administration, and the FCC, are supposed to do.

Now we all remember how several members of Congress pretended to demand a spectrum inventory before granting the FCC authority to auction off TV airwaves to Verizon and AT&T. And how our friend FCC Chairman Julius Genachowski repeatedly pretended to promise one. And how lawmakers granted auction authority with Genachowski saying that of course the FCC had a spectrum inventory that no human has yet reported laying eyes on.

Yes, the commission has a “chart.” Yes, it probably has a clue what spectrum is licensed for what use. But there is still no comprehensive information available on how much spectrum already licensed for wireless services has yet to be built out, or if it will be. The one FCC official who asked the question publicly of Verizon was shown the door two weeks later. He clearly didn’t understand that the 10-year build-out requirements for wireless carriers comprise letters to Santa Claus.

As someone writing to and for the broadcast industry, I suppose it’s easy to dismiss my rants as a defense of that industry. This is not necessarily true. I am also a citizen of a presumed democracy in which government officials are charged with acting in everyone’s best interest, not just their own and whoever gives them the most money. (No, really, that’s the underlying principal of “democracy,” and not whoever dies with the most toys, wins. That would be the pathologically narcissistic Gordon Gekko ethos of the ’80s.) And so the National Broadband Plan as written—and being executed—is worrisome to me in more than one way.

Aside from being long on marketing frippery about how wireless data traffic is exploding and the nation stands to make a gazillion dollars from one big broadband network, the thing is short on cost estimates. Like everything else perpetrated on The People by lower-case politicians, the pay-for—like the spectrum inventory—is a pesky detail over which they can’t be bothered. Then there is the assumption that a massive national infrastructure project can be pulled off in this day and age. I defy anyone who drives on a road to accept this premise without a hint of skepticism. If the country can’t fill its potholes and keep sending kids to school, how is it going to build a national wireless infrastructure? See all those fees on your wireless bill? That’s how. We will soon recall $150 wireless bills with nostalgic fondness, like $1 gas. And you can either pay up or be dismissed as a knuckle-dragging, techno-illiterate troglodyte with no redeeming social value whatsoever—kind of like people who now rely on broadcast TV. All under the illusion that the airwaves are public.

For the record, I have never argued here that broadcast TV is the best and highest use of the spectrum between 54 and 698 MHz. It may or may not be—I don’t have the expertise to know that, and quite frankly, I don’t believe a bunch of lawyers in Washington, D.C. do, either. I’m told by engineers that those frequencies are not ideal for wireless communications because of the size of the antennas necessary. To that end, we do know that Verizon was willing to get rid of the 700 MHz spectrum it acquired in the TV channel reclamation of 2008 in favor of higher frequencies.

What I have railed against here since 2010, when the NBP was first released, is that it was short on facts, omitted adequate prior planning, and overtly favored one industry over another. If that were not the case, the mainstream press would be full of stories about what frequencies are best for what uses rather than wireless lobby talking points about “spectrum scarcity.”

As Prof. Jon M. Peha of Carnegie Mellon writes in his comments on the FCC spectrum screen docket, “more capacity and more spectrum are not the same thing.”

He continues, “One cellular system with 20 MHz of spectrum can easily have a much greater data-carrying capacity than a competitor that also has 20 MHz, or even one that has 40 MHz. It is literally the defining principle of a cellular system that the system is made up of cells, and capacity can be increased with no additional bandwidth simply by deploying more cells. The issue is cost; adding a cell may mean spending a half million dollars on a new cell tower.”

Presumably, new cells would have to be built to deploy any further spectrum acquired from TV stations, so why is there nothing in the NBP quantifying the potentially unused carrying capacity of existing networks?

Seriously. You tell me.