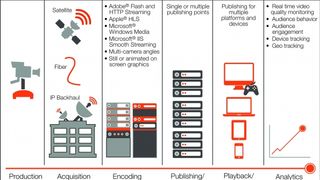 While major broadcasters have struggled with the daunting task of having to simultaneously target a myriad of display devices for their content in order to stay competitive (and generate new revenue), so too have the service providers that are helping them do that. Moving to the cloud has become a natural evolution and a key component of staying in business — for these companies and their clients.

Indeed, encoding a single live stream for the Internet has evolved into transcoding that single stream into dozens of different file formats so that consumers everywhere can view them. At the end of the day, creating a seamless and compelling experience for the consumer is what matters most — to everyone involved.

One such service provider (and there are several), iStreamPlanet, based in Las Vegas, says it has worked hard to keep up with the times. In 2000, Mio Babic, founder, president and CEO of the company, began working with media companies to bring live events like the Olympics to computer screens in a compelling way. Today his company has moved much of its audio and video file processing activities to remotely based data centers (the cloud) to keep up.

“Current technologies and products simply cannot scale to meet the growing demand for more content, longer viewing hours and high-quality viewing experiences across a plethora of devices,” Babic said. “In working with some of the largest brands in the digital media industry to produce some of the highest-profile online video experiences in history, we've seen firsthand how expensive, cumbersome and complex it is to keep up with digital proliferation. It is with those experiences and customers in mind that we are developing the next generation of media workload products and services.”

This move to the cloud has allowed iStreamPlanet to work with more customers in a much broader capacity. Babic’s strategy of offering the best products and technology and not committing to any single technology provider is also a secret to its success. Remaining technology-agnostic keeps the company current and able to offer the best tools for the application at hand.

The company also has been helped by the emergence of distribution infrastructure providers like CloudSigma, which has long-standing relationships with the Switch SuperNAP datacenter (located in Las Vegas and considered one of the largest such data centers in the world) and in the European-based Interxion datacenter (London). iStream Planet designs the system and makes technology recommendations, while CloudSigma implements the connections necessary to make it happen.

“Without the cloud, media companies would have to spend a lot more money on OpEx and additional hardware, which, frankly, no one wants to do,” said Robin Cole, vice president of Products & Services at iStreamPlanet. “The cloud allows [broadcasters] a much better level of fidelity in terms of scalability and control over the environment, than hardware has, to this point. So the cloud ends up being a great way to scale a business and save money.”

Similarly, offering such remote processing services has also allowed iStreamPlanet to save money relating to its operations, which it says it then passes on to its customers.

“As a service provider, we understand that we have to stay competitive in our pricing and our engineering expertise,” Cole said. “There’s a lot of competition out there, so offering reliable, secure service at a reasonable price is key to our success as well. But we also feel, with our heritage in digital broadcasting, we are uniquely qualified to do the job.”

Cole joined iStreamPlanet less than a year ago, after years at Microsoft, which was an iStream Planet customer. Among a number of clients, iStream Planet helped NBC stream content during past Summer and Winter Olympic games using Microsoft’s SilverLight technology.

“When I joined the company, what I found was that iStream Planet was growing along with industry needs,” she said. “And what the industry needed was a comprehensive platform that could accommodate different types of business models and video streaming scenarios. On the surface, media companies like NBC, Turner Broadcasting, AMC Networks and the United States Olympic Committee all had different requirements, but we’ve found that we could accommodate all of them with a similar cloud-based solution. They needed to produce complex live events that required multicamera, multiplatform distribution capability on a global basis. We needed a fast and easy way to do that.”

One of the cloud-based services iStream Planet will soon offer — thanks to its CloudSigma partnership — is called Director 5, a video-on-demand, media-processing workflow that can scale to support up to 1000 concurrent encode and transcode jobs. Director 5 leverages the latest in virtualization technologies running on high-capacity hardware that, the company says, are intelligently provisioned and performance-optimized as needed, and then automatically removed when no longer needed. So customers pay only for what they use.

The company said it will also market what it calls an “advanced metadata services framework” that leverages device-customizable Electronic Programming Guide (EPG) and TV/VOD metadata, authentication, authorization, and ID federation for live and on-demand streaming of content to over-the-top (OTT) devices. AMSF gets content owners and distributors up and running quickly and allows them to accommodate all types of IP-connected devices — including smartphones and tablets — as well as and OTT devices like game consoles and set-top boxes.

Both Director 5 and AMSF will be commercially available later this year.