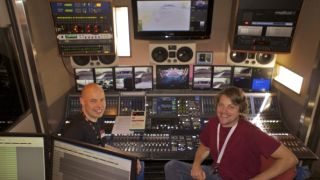 Johann Strauss II, the “Waltz King,” perfected the Viennese dance form that his father also practiced. Neither of them, most likely, imagined the day when their works would be broadcast to millions of listeners.

Dutch conductor Andre Rieu, known as today’s “King Of The Waltz” to his fans, recently returned to his home town of Maastricht in the Netherlands to give a series of concerts in celebration of the 25th anniversary of his Johann Strauss Orchestra. The Dutch company United Studio and Outside Broadcast was hired to record the performances. A Lawo mc²66 digital audio console and Lawo Nova73 HD router, offering 96kHz resolution, were central to the production.

In addition to the orchestra, the 150-piece Royal Choir Society Maastrichter Staar performed during the concert series. Close miking the orchestra, recording the choir and guest artists tasked the console with providing a total of 164 channel inputs.

United’s Huub Lelieveld says that “Lawo is unique in the world of broadcast audio because they have their own rental company. Even if you own a smaller Lawo system, you can easily expand your input and output capability by renting what you need for the project.”