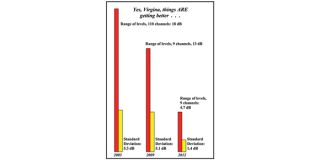 Alert readers may recall that for the past year I’ve been devoting most of this column to the CALM Act and the related issue of audio levels and loudness in broadcast television audio. As recently as my last column, I was making informal measurements of said broadcast audio for the purpose of assessing what progress, if any, we’ve been making.

At the same time, Parsons Audio, of Wellesley, Mass., puts on an Audio Expo every year, sort of a “mini-AES convention” for us New Englanders. I often am a presenter. This year, Expo Director Roger Talkov asked if I would talk about the CALM Act and audio-for-video levels these days. For that talk, I went back and looked at all my assessments of such audio, starting back in 2003. It turned out to be very interesting, a quite revealing and useful perspective for us today. So, I thought I would share with you just how much things have changed over the last decade. How soon we forget!

WHERE WE WERE IN 2003
In 2003, I took a listen and informal evaluation of 110 channels supplied by my service provider. Most of the channels were analog, levels were all over the place (18 dB range, 5 dB standard deviation!) and audio quality was, ah, highly variable. It was not a pretty sound, as they say. That’s where we were a decade ago.

WHERE WE WERE IN 2007
In 2007, as a spin-off of an evaluation of Modulation Sciences’ Spider Vision Surround Sound signal level meter (yet another device created by my mentor, Neil Muncy), I undertook to informally measure and evaluate 184 channels of TV audio:

• 9 channels were HD
• 171 had analog outputs that triggered Dolby Pro Logic
• 18 had Dolby Digital audio
• 82 channels were in mono, 59 were in stereo and 43 channels had enough audio in the rear channels to be called surround, sort of
• 138 channels seemed to have no audio problems, while 46 channels did!

So, just five years ago, TV broadcast audio was really pretty dreadful, as well as half mono. I was startled, as I said earlier, to go back, recall and then contemplate just how flaky, variable and indifferent the quality of it really was. Just five years ago!

WHERE WE WERE IN 2009
In 2009, I took a more detailed and focused look at the levels of nine adjacent channels on my Favorites list. These were all digital HD channels. The levels were still all over the place (13 dB!), though the other problems were mostly gone. I also evaluated the difference between commercials and program and found the difference didn’t seem to be too bad, although commercials were still louder and subject to some pernicious compression practices.

In September, I measured 58 channels, lumping them into three tiers (network, variety and movies). I also undertook another reasonably detailed consideration of the difference between the audio levels of commercials and program material.

This is what I reported to you last month. I was really impressed then by two things: first, that both the range and standard deviation of levels was really tightly controlled across channels and second, that the commercials, particularly during a live NFL broadcast I studied, were well handled.

WHAT DOES IT ALL MEAN?
It is reasonable to assume that the observed change between 2009 and now is due to the emerging presence of the CALM Act. Interestingly, that law simply requires us to obey the industry standards we had already developed for control of levels but weren’t obeying.

Now that they’re the law, we seem inclined to take the trouble to obey them. So much for self-regulation, I’m sorry to say. Maybe there is a place for government in all this, after all.

But beyond that, our broadcast audio really has improved—a lot! Thinking back to how crummy it was in 2007 and how truly dreadful it was in 2003, it is clear that, in fact, we have really made things better.

Personally, as a music guy and pickypicky snotty audiophile academic type, I still find much that I can complain about. From my lofty and arrogant 24-bit, 96 kHz. Fs hi-rez purist point of view, you could say that broadcast audio still sucks. However, when we get down into the trenches and start evaluating what’s really going on in TV audio, it is soooo much better than it was that there really is no comparison.

So, set aside Dave the Snot. You guys have done well, really, really well. On behalf of all the pro, semi-pro, amateur and wannabe couch potatoes out here, thanks. Believe it or not, we can really hear the difference.

HAPPY HOLIDAYS
Here in New England, we still wish people Merry Christmas occasionally. So, Merry Christmas, Ho Ho Ho. Believe it or not (I personally don’t), this marks the end of my 15th year writing about audio for TV Technology. Although I’m well into geezerdom, and have a number of too-long teeth, I hope to keep this up for a while longer. It’s a really interesting business, and working with a magazine of this professional caliber has been a great pleasure. More to the point, writing for you has been an absolute ball!

Thanks for listening. And try to stay CALM!

Dave Moulton was nominated for a Grammy once and never ever lets his cleaning lady forget it! You can complain to him about almost anything atwww.moultonlabs.com. Oh, Happy New Year, too.