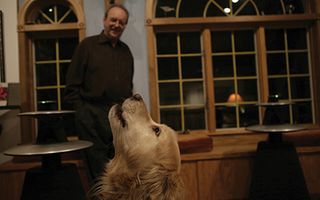 Writing my December column about the improvements in TV audio and levels over the past decade got me thinking. I have been writing this column now for 15 years (my first column was eggzacly 15 years ago: January, 1998), which makes it the longest job (if you can call it that) I’ve ever held, at least working for someone else. In our business, that’s a looong time.

So I went down to the vault this morning, cleared out the worst of the cobwebs and rodent droppings, got some WD-40 on the hinges, and after sawing through the old rusty padlock, pried the door open, pumped out the standing water and snakes, and found, lo and behold, in a moldy old box, My First Column! Holy catfish, as Robin used to say. (I think that’s what he said, anyway.).

MY FIRST COLUMN, FOR SOME PERSPECTIVE
That first column was all about codecs (my first column title was “Really High Quality Audio Data Compression Has Arrived.” Kinda snappy, don’t you think, at least for 1998?). I’d just spent a year subjectively measuring codecs as part of the very vigorous scramble going on at the time between the various players in the format wars, to have their codec chosen as the best one and therefore implemented in every television, telephone, radio and computer in the land, oh boy!

So, I wrote about codecs for you. After spending some time blathering about audiophiles and their high-resolution needs and data requirements, I actually shared with you some of our findings for Lucent Technology (remember them?). Those findings included some fairly robust predictions that half us Golden Ears and three quarters of the great-unwashed public wouldn’t be able to tell the difference between a (good) codec transmission and its source signal. More to the point, we found that 90 percent of the time, even if we heard a difference we wouldn’t find it annoying. No cursing, grumbling, whining or writing irate letters to our Congresspersons (they hate those!). Mission Accomplished, as they say.

So, I took a sip of the Kool-Aid too, and suggested that now that good audio was going to be available for the masses, the next problem would probably be loudspeakers. I predicted: “the weak link is now really going to be the end-user amplifiers ’n speakers, particularly as they are presently supplied in TVs. The quality potential of these new compressed signals is really going to expose deficiencies in that part of the playback path, not to mention any short-comings in the production process.”

The author at home with the since-departed “Ted” who loved to sing. According to Dave, his favorite artist was Aretha Franklin and “he could do pretty decent duets.” The loudspeaker part is a little more curious and not at all what I expected to happen. Growing out of Apple’s and Google’s efforts to reduce everything to what can be stored and displayed in a very small plastic box, we’ve experienced, among other things, a dramatic reduction in the physical size and, therefore, quality of our audio playback.

Most interesting. We also seem to have fractured our physical audio delivery systems into four distinctly different genres, all served by the same HD digital audio feed embedded in our productions:

• Ear buds, those tiny in-ear headphones of widely varying quality, that are incapable of reproducing discrete surround sound, leave it up to our imagination;

• Computer monitors, those small, mediocre speaker systems used to accompany computers and driven by the computer audio output, whatever format it happens to be;

• Mid-fi “home-theatre-in-a-box” playback systems, either discrete or synthesized (such as sound bars), with mediocre sound quality and limited levels capability, and

What is even curiouser is that the best of us production types have figured out how to produce a single multichannel audio feed that reproduces effectively in all of those genres. Various live sports offerings (particularly the NFL and the Olympics), live entertainment, some of the cable productions (particularly from HBO, but plenty others, too), all seem to be reasonably well presented over just about any loudspeaker setup. That couldn’t have been easy.

WHAT DOES IT ALL MEAN?
Our progress is actually quite encouraging.

While I’m concerned about the fracturing and dumbing down of the actual physical hardware used to reproduce sound, that’s just me! The broadcast industry actually seems to be adapting quite well. We’ve really come a long way in 15 years— I suspect we’d all be appalled at both the quality and the (limited) quantity of good TV (especially audio) if we were to dash back to 1998 for a brief visit using a flux deoxenator.

Our broadcast levels are much better, our bandwidth is pretty decent, some stereo is really pretty satisfying and occasionally there is something of interest in the surround channels. Further, audio capture (the whole microphone-to-mix stage of production) seems much better and more consistent today than it used to be, even for ENG. We’ve happily settled into our use of our codecs, and the murmurings of doom from the audiophile community have kind of evaporated. Can we hear ’em? Yup, sort of. Are they annoying? Nope, and now excuse me while I get back to my show.

In many respects, it really is good enough!

Dave Moulton is still refusing to either look at TV or movies on his computer or participate in social media, and he complains incessantly about the ADD editing style so much in fashion these days. However, you can still complain to him about almost anything at his website, www.moultonlabs.com.