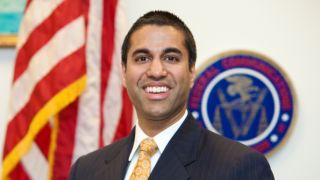 Republican FCC Commissioner Ajit Pai — one of two new commissioners to join the agency this May — told a broadcast conference in Dallas last week that broadcasting is not a fading relic from the past and that it would be “counterproductive” to move all broadcasting to broadband services.

Although Pai spoke at an NAB radio conference, his words were aimed at both radio and television.

“The most popular programming enjoyed by Americans continues to be offered by broadcasters,” Pai said. “Last year, in fact, 96 of the 100 most watched television shows in our country were aired on broadcast television. As we head into the future, I believe that broadcasting should and will continue to play an important role in America’s media landscape."

He continued, “To be sure, the rise of broadband is having a revolutionary impact on the lives of Americans. And we at the Commission must aggressively pursue policies to remove regulatory barriers to wireline and wireless broadband deployment. But I don’t view broadband as a substitute for broadcast. Instead, I see broadcast and broadband as complements.”

Moving forward, Pai said, it would make sense for some services to be provided through broadcast and others via broadband.

“If we were to shift all of the services provided by broadcasters to broadband, that would actually be counterproductive,” he said. “It would make our spectrum problems worse, not better. So that’s not what the market will demand.”

As an example, Pai said it is a much more efficient use of spectrum to deliver high-demand programming like the Super Bowl through a one-to-many broadcast than to provide it through millions of one-to-one wireless broadband connections.

“Because of this, it’s critical that the FCC not neglect broadcasters," he said. "During my first four months at the Commission, I have met with broadcasters more than 25 times, and I’ve been listening carefully to what you have to say. In these meetings, I keep hearing the same thing. Unfortunately, it seems there’s a widespread perception that today’s FCC is largely indifferent to the fate of your business.”

Pai said he doesn’t believe that this impression is accurate.

“I care about broadcasting ... I agree that the commission can do a better job of focusing on what’s important to broadcasters," he said. "We also need to make a greater effort to keep the lines of communication open between us.”

As to television ownership, the Republican commissioner said he is optimistic the commission can reach a consensus on eliminating the radio-television cross-ownership rule.

“I agree with the commission’s 2011 conclusion that the rule is no longer necessary to protect competition, localism or diversity,” he said.

Once the review of the ownership regulations is complete, he said the commission needs to defend those rules in court successfully.

“If an appeals court rejects our reform efforts yet again, we should take the case to the Supreme Court,” he said. “We need to finish this job.”