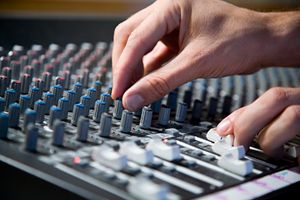 And so I sit, for the thousandth time in my life, facing a mountain of production music discs, and mumbling under my breath. Hateful task. I'd rather clean the restrooms than face another stack of CDs or another music browser Web page.

On this occasion, no different than most, the clients are unable to articulate their expectations for the music—is it a jazzy sort of show, or a rockin' tribute to their product, or maybe more of an heroic, triumphal march to glory? No matter; I'll pull them all, and play them against the edited program. Check that: I'll waste time playing every last one of them against the edited program.

And I still won't find the right track.

©iStockphoto.com These clients, I'm sure, don't appreciate that the $85 dollars they'll pay for a piece of production music is a bargain. They'd really prefer to bring in a worn-out CD of "Wind Beneath My Wings" from home, or a direct-marketed compendium of Great Classical Themes… there's no acknowledgment of the inherent dangers of intellectual property theft.

Start a discussion about the intended uses of the show, though, and the gloves come off. How can it be so much more expensive, they want to know, if the song plays on their company's public Web site in perpetuity? Perhaps because they told me that 12 people in a board room would see the clip exactly once, and that's what I licensed. Knuckleheads.

Still, it's hard to blame my ill will toward production music entirely on the clients. After all, if I had successfully chosen that one most perfect piece of music in all the world… they'd never have said a word. No comment. That's the true mark of a production track's success—to sound so natural under a given scene that it draws no attention to itself.

But that's seldom the case. My own musical myopia, the misleading track descriptions, and, oh yes, the occasionally lame music itself—all of these together conspire to scuttle my track-finding voyage. After hours of searching, all I've got to show for it is a list of 12 "maybes" and two busted jewel cases. Reluctantly, I mix in one or two of the maybes, and prepare to take my lumps.

It's almost always been this way, starting back in the days of vinyl discs: pull volumes based on the often-inane descriptions of the included cuts; sample a few seconds; abort, horrified, and move on.

There's an equal-but-opposite effect, too. On rare occasions, a song provokes such a strong positive response that I linger long past the bailout point, waiting to hear more. If that composer's got more tracks on the disc, I listen to them all; never mind the fact that the tempo, genre, key and length are completely wrong, and that I can't possibly use them. Just let me hear more.

And once in a while… ahh, the magic. The perfect cut, well-paced and scored, plays alongside the heart rending scene; and the eyes become watery, and a lump rises in the throat. Yes, this is the right piece of music.

And that's the ultimate endpoint, an exercise in theatricality—in anticipating the audience's response to the music, and meeting an emotional need. In the words of an old theatre professor of ours, "… the house lights dim; a little blue on the scrim; the timpani rolls…" and the mood is irrevocably set. The show sweeps us away.

Of course, here I am in a noisy closet of an edit room, intermittently answering phone calls and e-mails, and pretending to search for that magical track, the one that captures the soul of the project. Fat chance.

We've all had our share of disappointments with the practice, and process, of finding the right production music. But I'm reminded of Meredith Wilson's "Music Man," Professor Harold Hill, who advocates the "Think System": Just imagine the beautiful music you want to hear, and you'll be able to play it. That might as well be us he's lampooning—hoping for the best music ever, and praying that we don't have to work too hard to find it.

Walter Schoenknecht is a partner at Midnight Media Group Inc., a New York-area digital production facility. You can reach him via e-mail atwalter@mmgi.tv.