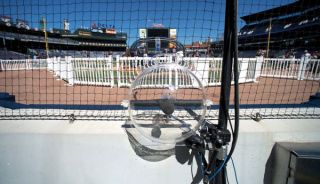 Where this parabolic microphone sits behind home plate in 2009 is prime fan seating in 2010. (Image credit: Dennis Baxter)

There are sounds associated with sports—like the crack of the bat and the swish of the net—that are expected by the casual television listener. Unfortunately, in the last decade, the crack of the bat became more difficult to capture after the parabolic microphone behind home plate was displaced by the fan seating that got even closer to the field of play.

New venue designs, changes on the field of play and challenging venue and team management have always forced clever audio practitioners to adapt different technologies, ingenious packaging and some audio adventurism to capture that Emmy-winning sound.

MADE FOR TV SOUND

Television is the best seat in the house at any sporting event. How can you beat different camera angles, replays and the sound? It is capturing and delivering unique event-specific sounds that bring the listener into the sport with complete immersion and belief.

There are a couple of givens in sports audio—you have to have a big crowd sound, and you have to hear and understand the announcers. After that, the sound is the imagination and drive of the audio team.

Film and television are unique because while the listener has some expectations, he/she is definitely willing to be entertained. You can hear the crack of the bat at the ball field, but the swish of the net? Just like the cup sound from the golf green, it is made-for-TV sound.

There is no one that has pushed the sonic boundary of baseball more than Joe Carpenter, senior audio mixer and sound designer at Fox Sports. Joe and his team have put microphones in the bases, around the outfield, on the yellow poles and as close to the players as permitted.

Home plate is the “sweet spot” of action. During the 2019 MLB World Series, I noticed that the sound was more open and natural—almost like you were standing next to the batter. Looking around the field, I found that in addition to any microphones from the sides that were aimed at home plate, Joe had shotgun microphones suspended in the protective netting aimed at home plate. This simply was the best coverage of home plate that I have ever heard! (By the way, Joe’s sound design and microphone plan would easily translate into an impressive immersive sound mix.)

Placement of the microphones has always been problematic because a faction of directors and producers do not want to see the microphones, but premier events like the World Series accommodate advance and aggressive microphone plans and pave the way for better sound than from the weekly shows.

Setup time is always limited and there is little time to test something new, which validates learning from the big events like the World Series and from Joe Carpenter. You should build your sound design on the experience of those that came before you and adopt that knowledge for your situation.

The sound of sports has significantly improved over the last decade with more models and types of microphones than ever. Shotgun, lapel and wireless microphones have long been the primary tools for sports sound capture, but nonconventional transducers like the boundary and contact microphone have been useful in capturing close and interesting sounds.

The contact microphone attaches directly to a surface and captures the sonic resonances in the surface.

A few examples of audio adventurism: I first used contact microphones in the 1996 Summer Olympics in Atlanta on the wooden Velodrome track, in 2004 on the balance beam in gymnastics, and later in the ice for figure skating in 2006. My friend, Ron Scalese, used them on the skateboard and bicycle ramps at the X Games and even worked on improving the design from a cheap off-the-shelf transducer. Clearly, the best sound from the 2018 Olympics was the sound of figure skating, where a contact microphone was frozen in the ice of each corner creating a spectacular presence in the sound as the skater approached the cameras.

Sound design from the perspective of the athlete would include microphones in boxing corners, on players and coaches, under benches and in dugouts. But the ultimate is microphones on the competitors.

Sports professionals should consider TV friendly sound—why not? It is television that made these athletes and coaches multi-millionaires. ATSC 3.0 (aka NextGen TV) provides for interactive channels which provide income opportunities. For example, coaches from the NBA are often seen and rarely heard, but a real-time coach channel offers income opportunity to the broadcaster and the coach and skirts any language issues. Cheating can be curtailed with effort, encryption and enforcement.

Sports venues tend to have poor acoustics and excessively loud PA systems, making it more challenging to capture atmosphere. Ambiance and atmosphere sounds are the foundation and glue to a sports mix. Efforts to place microphones off-axis of PA speakers are recommended. Additionally, plan on multiple microphone locations because there will be zones of activity like the band and student section or home and visitor areas, which should sonically overlay creating dimension and the perception of depth.

Immersive sound is in development and the big question is: What sounds do you put above the listener/viewer? More crowd? It is typical in baseball to hang microphones from the announcer booth over the crowd capturing a stereo perspective. Joe Carpenter added crowd microphones to the outfield and suspended microphones from under the seating decks. Perhaps creating zones of interest is a solution. (Personally, I would like to hear the vendors in baseball above me shouting, “Cold Beer!”)

Every event must have a fresh approach to sound design. Immersive crowd sound for sports will have to be more than just progressively distant microphones from the sound source, plus this effect can be created with reverb and acoustic room simulators.

Finally, capturing quality sound is difficult because of the polluters. Excessive PA, ice machines, generators, blimps, and drones, are roadblocks to perfecting the sound of the sport. When I tune into sporting events, I am shocked at how much extraneous and obnoxious sound there really is. My first broadcast golf tournament was “The Masters” on CBS and I learned that the “birdie” microphone was nowhere close to the clutter that surrounds the support of the golf course.

One thing that is obnoxious and unnecessary is excessive PA levels and chatter. In my decades of live television, I have fought the PA. But I still hear from all my colleagues that the volume of the PA is excessive, further making the sound mixers’ job more difficult. There has to be a balance between venue entertainment and quality broadcast which begins with a good relationship between venue management and the venue PA operators.

At the end of the day, good sound requires a major effort to capture the sound and an unwillingness to accept any compromise—then add the spirit of audio adventurism. My advice? Think creatively about the sound effects that you want to achieve and how that enhanced sound will entertain your listeners.