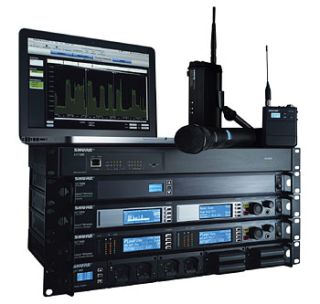 LOS ANGELES-- As the FCC begins to prepare for its so-called incentive auction of up to 20 television channels-worth of frequency spectrum, wireless audio system manufacturers and operators are continuing to come to grips with the reduced spectrum that remains following the 2008 sale of the 700 MHz band.

Shure’s Axient wireless mic system supports up to 15 systems in a 6 MH z TV channel. "[T]he National Association of Broadcasters remains vigilant and vocal in its position that it has already given up over 100 MHz of spectrum during the 700 MHz band reallocation, and that the search for dedicated broadband spectrum should be focused on other bands," noted Chris Lyons, manager, technical and educational communications, Shure Inc., writing on the company's website.

Thankfully, provisions in the FCC's 700 MHz auction plan, including reserved channels and the TV Bands Devices Database, should help smooth the way for operators in the reduced frequency spectrum.

"The fact that the FCC committed to having a few reserved channels in every market for wireless mics was a real win, because it recognized the importance of wireless microphones and allowed for their use without interference," commented Lyons.

But, he noted, "The big question will be, as with any other regulatory change, how quickly users become aware of these changes and how quickly do they move to take advantage of the database and reserved channels. The learning curve is a big hurdle if you're dealing with less skilled or volunteer technical staff."

NO MORE 'PLUG AND PLAY'

The FCC is reserving at least two TV channels per market exclusively for RF mic use that are off-limits to TVBDs. Information on reserved channels can be found using Spectrum Bridge's "Show My White Space" online tool.

If those reserved channels are insufficient for a specific event, licensed users can register directly with the database for temporary protection in additional channels. Unlicensed operators must request database protection from the FCC. Shure has published detailed instructions for registering with the FCC on its website.

Information on reserved channels for RF mic use can be found using Spectrum Bridge’s “Show My White Space” online tool. As a result of the reduced available spectrum, "I think the days of users taking a system out of the box, turning it on, and using the default frequency are over," said Joe Ciaudelli, director of market development and education, Sennheiser. "Best practices are becoming more important, and will get even more important as we move forward. You absolutely have to do your homework now."

"I think everybody has finally come to grips with the fact that bandwidth is shrinking," commented Mark Donovan, CTS-D, CTS-I, sales engineer-installed sound, Audio-Technica U.S. "All you have to do is look at how many of these smart phones get sold whenever they release the newest, fanciest gadget to see that the writing is on the wall."

In the past, operators could enjoy good success with wireless systems even when they did almost everything wrong, agreed Lyons. "They would choose frequencies that weren't compatible, put their antennas in the wrong position or orient them in the wrong way, have the receiver right next to some digital device or put a laptop on top of it, and still the thing would work."

Now, in this reduced-spectrum landscape, said Donovan, "The name of the game is how many systems we can squeeze into a TV channel."

But with the expected proliferation of TV band devices, or TVBDs, perhaps only a year away, "There are still going to be more things that come in and cause more RF noise, if not interference," said Donovan. "So many manufacturers are looking for the next new technology that will get them free and clear of this brutally congested area."

However, he cautioned, "There is no one magic technology that's going to solve it all."

Joe Ciaudelli, director of market deverlopment and education, Sennheiser As he pointed out, traditional UHF technology is over 80 years old. "While it might seem to some end users, in their frustration, that the manufacturers are a little bit slow to come up with solutions for them, the truth of the matter is the solutions are not that simple. We are talking about a lot of different options and technologies, and quite frankly some technologies that have never been tried or used before."

Shure, for its part, has launched two new RF systems during the past year—Axient and ULX Digital—which respectively support up to 15 and 14 systems in a single TV channel, or 6 MHz. An analog FM system can typically handle eight to ten.

Azden Corp. also makes a broad range of UHF and VHF wireless microphones, transmitters and receivers. At the pro end of the scale, Azden has designed its slot-in and camera-mount equipment for compatibility with the new DTV landscape, operating on 188 channels across four UHF bands. Many models, including the company's 305, 310, 325 and 330 Series camera-mount systems, are alternatively available in CE-approved versions with 240 channel options across the 794 - 805.95 MHz range.

One of the industry's top wireless systems frequency coordinators, James Stoffo, recently reported that a new company is working on a system that would allow up to 150 channels in a six-meg chunk. "This is 15 times more spectrally efficient than the stuff that's been on the market since 1962," when wireless mics were first introduced into the United States, said Stoffo. "It uses extremely narrowband analog technology."

According to Ciaudelli, while a UHF mic can be used for a wide variety of applications, in the future, "There will be systems that are designed that are application specific." For example, "It'll be great for a wireless conference room, but won't be able to be used in a Broadway play, because that technology cannot transfer over."

That said, Sennheiser has also been making incremental improvements to its existing products. The latest version of the company's 5000 Series transmitter, for example, offers a low intermodulation mode, said Ciaudelli. "This draws a little bit more current from the batteries to feed the RF amplifiers and makes them more linear. This allows you to pack more channels within the same RF space; it's more spectrally efficient."

The company's AB 3700 antenna booster offers improved linearity, which increases immunity to other high-powered signals, which would otherwise generate intermodulation in the system. "Highly linear equipment is going to be more and more important," noted Ciaudelli.